Get the app Get the app
Already a member? Please login below for an enhanced experience. Not a member? Join today
News & Media Corrosion eats author's aircraft

But for a sharp eye and a mirror, the hidden damage could have grown much worse. Four rivets that helped hold the tail of a 1978 Piper Warrior in place had lost their heads, though the parts they held remained in place. There was no sign of disruption or distortion within the empennage, and no outwardly visible clue betrayed what had been happening inside. It would have gone on at least another year to the next annual inspection, but for sharp eye, a couple of man-hours, and a few fresh fasteners.

The eyes that spotted the trouble belong to Eric Santerre, director of maintenance (and an inspection authorized mechanic) at VIP Avionics in Hartford, Conn. Santerre briefed the author—an airplane owner for just over a year—about the relentless threat of corrosion to all aircraft of a certain age.

While Cessna has been spreading the word about mandatory corrosion inspections for 100-series aircraft, and 200-series Cessnas are also subject to inspection for corrosion and fatigue, Santerre said no make or model is immune. Corrosion protection became more standardized in the mid-1990s, Santerre said, but was an option often skipped on older models—and the results don’t always show. Sometimes, they are hidden beneath the aluminum skin.

On a nearby Cessna, Santerre points out another kind of corrosion. While the Piper’s bolt heads succumbed to the interaction between different metals, protrusions shaped like tiny rivers wrinkled the Cessna’s paint and offered evidence of the deterioration of aluminum beneath. While it was still a small area, and did not impact airworthiness, Santerre explained that over time it could riddle the skin with holes “like Swiss cheese” if left untreated. There is no good rule of thumb about how long that takes, but it is often a matter of years.

Eric Santerre, director of maintenance at VIP Avionics in Hartford, Conn., spotted corrosion in the tail of the author’s 1978 Piper Warrior II.


The solution is to sand the corrosion off and apply a corrosion treatment such as Alodine, which reacts with the metal to form a “sacrificial layer” of protection that turns bare aluminum the color of wheat. With a coat of primer, and paint, the problem is solved before it comes to the much more expensive option of replacing skin.

Rebuilding the protective layers of ions, primer, and paint is not the only option: Some types of corrosion can be treated with another kind of product that encapsulates the corrosion and delays its progress. CorrosionX and ACF50 are two popular brands, available in spray cans and bottles. They do not, however, offer a permanent fix, and usually must be re-applied every couple of years or so, Santerre said.

There are many variables that determine an individual aircraft’s vulnerability to corrosion: Weather, proximity to saltwater, proximity to factories or power plants producing acidic emissions, the quality of the paint job all can affect the pace of corrosion.

A hangar can often slow it down, Santerre noted.

Only if you can afford it, the author noted. 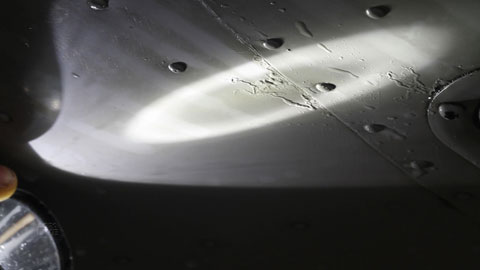 In the center of the flashlight beam, just left of the seam, corrosion is evidenced by the worm-tunnel-like disruption to the paint. Deteriorating aluminum beneath has caused paint to separate.