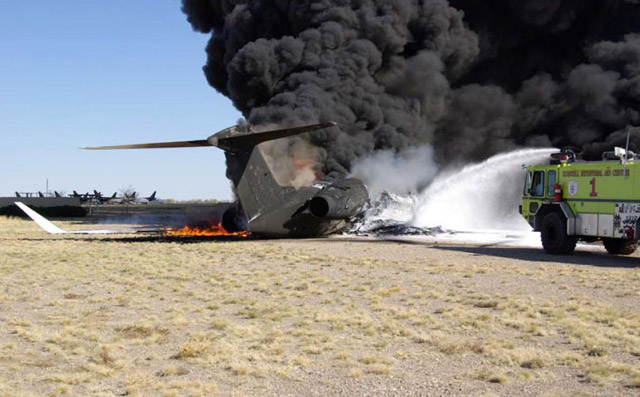 A Gulfstream G650 was consumed by fire after a flight test crash on April 2, 2011. NTSB photo.

In the race to certify what is, for now, the world’s fastest business jet, Gulfstream Aerospace Corp. ignored warning signs that might have signaled a fatal stall well in advance of an April 2, 2011, crash in Roswell, N.M., the NTSB found.

Board members, meeting Oct. 10 to review findings of the investigation, faulted the company for failure to analyze stalls that occurred on two prior test flights, and consider that stall speed in ground effect is lower than engineers had predicted.

Four people—two pilots and two engineers—lost their lives during a test of single-engine takeoff performance. The jet stalled just after liftoff, at an angle of attack lower than expected, with no activation of the stick shaker and audible warnings, investigators found. The stick shaker and warning systems had been calibrated to activate at higher angles of attack. The stricken jet rolled to the right, dug a wingtip into the ground, and veered off the runway at Roswell International Air Center. It struck a concrete building on the field and burst into flames.

NTSB Chairman Deborah A.P. Hersman, among other board members, said Gulfstream’s test program crew should have acted on warning signs from two previous flights that resulted in uncommanded rolls just after liftoff, which were attributed, incorrectly, it turns out, to causes other than a stall.

“I think the event itself should have been a trigger for people to stand back and understand what happened,” Hersman said. “They got a very significant sign and it didn’t seem to be addressed.”

NTSB staff noted that Gulfstream has made changes to its flight test program procedures in response to recommendations. The G650 test program concluded with no further incidents, and Gulfstream announced certification of the bizjet in September.