Get the app Get the app
AOPA will be closed July 4th, in observance of the Independence Day holiday. We will reopen at 8:30 am ET on Tuesday, July 5.
News & Media Pilots: Nick Baker 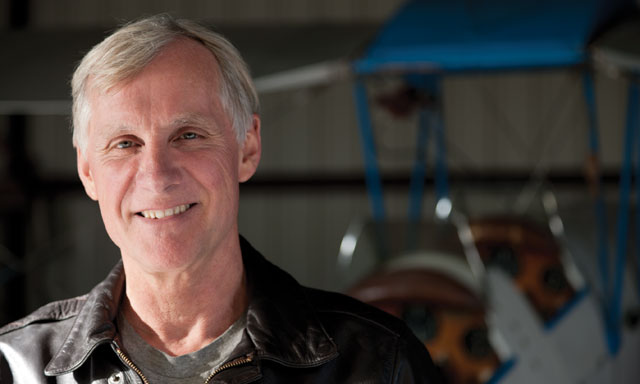 Meet Capt’n Nick. A business-jet captain for NetJets Aviation, who flies affluent clients to destinations in the United States, Canada, and the Caribbean, Nick Baker also transports less well-heeled passengers to a place they’ve never been before—the aviation world of yesteryear. Baker’s time machine is a 1940 Tiger Moth that he purchased from late actor Cliff Robertson in 1987. When Baker first saw the Tiger, it was a forlorn wreck languishing in the back of Robertson’s hangar. “The Tiger was full of holes, leaked gas, and looked and smelled like a vintage aircraft that needed restoration,” he says. “So I restored it.” The Tiger comes with a rich history: The names of aviator Charles Lindbergh, astronaut Buzz Aldrin, and actor Christopher Reeve are inscribed in its logbook.

Robertson had bought the airplane in England when filming 633 Squadron; the airplane later was featured in Silver Streak with Gene Wilder and The Aviator with Reeves. In 2002, Baker established “Capt’n Nick’s Vintage Biplane Rides” at Cable Airport in Upland, California, and to date, he’s taken more than 1,500 people aloft.

Born in London, England, Baker learned to fly when he was 14 years old, training in a de Havilland Chipmunk. He earned his private pilot certificate at 22 and, later on, came to the United States and settled in Southern California. He worked two jobs to pay for his ratings and then put his skills to work towing banners and gliders. He moved on to flying for various passenger and freight airlines, including one that operated vintage Beech 18s—his all-time favorite twin.

Now a 13,600-hour pilot at 55 years old, Baker’s “day job” is flying a Citation Sovereign. He has been with NetJets for 10 years, flying all kinds of people anywhere they want. “The Citation is a good all-around performer that can get into relatively short fields, and it carries up to eight people very comfortably,” he says. “The only thing our passengers have in common, really, is that they enjoy the experience.”

Baker is as passionate about aviation today as he was 40 years ago. And he’s passing the torch to his 19-year-old son, Emerson, who’s getting a tailwheel endorsement. When Baker retires, he plans to barnstorm all over the country in his 72-year-old biplane. In the meantime, he transitions easily from being a professional pilot in the here-and-now to a barnstormer reliving times gone by.