Get the app Get the app
Already a member? Please login below for an enhanced experience. Not a member? Join today
News & Media Power loss over rough seas

A Coast Guard helicopter rescued two pilots from a Cessna 185 floatplane Sept. 9 after they made an emergency landing on rough water. Photos by the California Highway Patrol

Stanley E. Shaw and his adult son sat in the cockpit of the Cessna 185 floatplane, tossed about by six- to eight-foot swells. A sudden loss of power had forced an emergency landing off the California coastline south of Big Sur; the nearest Coast Guard search-and-rescue helicopter was in the San Francisco area, occupied with two other missions rescuing boaters in the area.

But technology and multi-agency coordination helped a rescue crew reach the stranded pair just in time. A Coast Guard Eurocopter MH-65C lifted the second occupant from the Cessna with two minutes left until bingo fuel—and just moments before the aircraft sank into the ocean, said Coast Guard Lt. Chris Courtney, the aircraft commander of the rescue flight.

Shaw said he and his son, also a pilot, were on their way from Southern California’s Camarillo Airport to Canada for an annual fishing trip Sept. 9, flying at 1,700 feet, when they experienced the loss of power. The engine didn’t sputter; it was as if someone had just pulled the throttle back, the 24,000-hour commercial pilot explained. He had little choice but to set up the floatplane for an emergency landing on the rough seas. 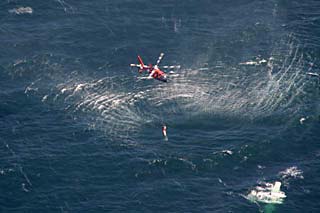 A Coast Guard rescue swimmer hoists the occupants of a sinking Cessna 185.

“I decided to go with the waves because they were as tall as your garage,” Shaw told AOPA, explaining that he surfed the first couple of waves until he was slow enough to go into the third. The impact was abrupt, but the two men were able to stay in the aircraft, communicating with Oakland Center and the Civil Air Patrol as they waited for help to arrive.

Communications got a boost from a passing general aviation pilot and his wife, who circled overhead to relay messages between the downed aircraft and Center. Socata Trinidad pilot Bob Lenox was at 8,500 feet on his way home from a fly-in at Paso Robles when he heard radio communication between the Civil Air Patrol aircraft and Center start to break down as the aircraft descended, Lenox said. He reduced to holding power and kept the aircraft—the 185, the CAP airplane, then the California Highway Patrol airplane, and then the Coast Guard helicopter—in sight for about an hour and a half relaying messages, he said.

When the four-person MH-65 crew on duty for Coast Guard Air Station San Francisco received the report of a Mayday call, Courtney said, they couldn’t immediately head toward the stranded aircraft. On this unusually busy day, they had two other cases: The helicopter vectored in small boats to assist the crew of a sailboat taking on water, and to rescue two individuals from the water near their overturned vessel, he said. The airplane—too far offshore for a small boat to assist—would require a riskier rescue, lowering a swimmer from the aircraft and lifting the men with a harness.

The helicopter diverted to San Francisco International for a hot refuel before starting the 120-mile trek to the floatplane. It was near the southern limit of the crew’s jurisdiction, and would put the craft near bingo fuel. The crew considered stopping for fuel in Monterey, but a tailwind bought them a couple extra minutes, Courtney said, and time was of the essence. Courtney later said that if the crew had stopped again for fuel, there is a good chance the men in the airplane would have died.

Thirty miles south of Big Sur, Shaw kept the Skywagon pointed into the wind with the little power left in the engine; he estimated that it wouldn’t produce more than 15 inches of manifold pressure, speculating that the problem may have been a turbocharger wastegate. About a mile offshore, the pair couldn’t use the aircraft’s outboard motor in the rough seas—and the coastline was “straight up and down mountain” anyway, he said. The waves washed over the floats, and the airplane began listing as the left float took on water. The wingtip dipped into the water.

Shaw said a Civil Air Patrol aircraft circled until it was low on fuel, and a Cessna 206 from the California Highway Patrol stayed with the airplane for more than an hour until the rescue. The Coast Guard acknowledged CAP, California Highway Patrol, and Customs and Border Protection aircraft for helping to spot the aircraft, adding that two emergency radio beacons, including a personal locator beacon, helped search-and-rescue personnel locate it. 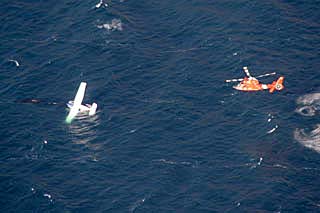 “That pretty much takes the search out of search and rescue,” Courtney said. The PLB sends an immediate latitude and longitude, saving rescue teams time and minimizing undue risk, he said.

Hoisting the men from the aircraft would be a challenging task: While the wind from the north helped the process some by reducing the amount of power required to maintain the hover, Courtney said, the swells made it more difficult. The helicopter lowered the rescue swimmer to the pontoon; the swimmer went to lift the elder Shaw first, but a wave caught him, Courtney said, and Shaw was in the water for about a minute. The swimmer was able to strap him into the harness, however, and lift first father, and then son, into the helicopter, Courtney said. By that point the airplane was listing almost 90 degrees to the left, he added; once the son was lifted, it tipped over. The helicopter had about two minutes until its bingo fuel, he said.

Shaw estimated he and his son spent close to two hours on the water. The helicopter transported the pair to Paso Robles, the Coast Guard reported, where they declined medical attention. Now Shaw said the National Oceanic and Atmospheric Administration wants the airplane pulled out of the ocean because it is in an environmentally sensitive area.

The busy Coast Guard crew logged five and a half hours that Sunday, Courtney said the following day. “We saved a total of four lives yesterday and assisted two.”