Get the app Get the app
AOPA will be closed July 4th, in observance of the Independence Day holiday. We will reopen at 8:30 am ET on Tuesday, July 5.
News & Media Skydivers, sub base, airport up in arms

Skydivers, sub base, airport up in arms 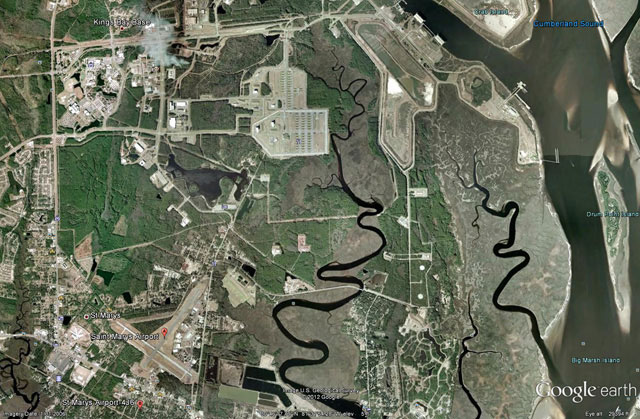 This Google Earth view shows St. Marys Airport at the bottom left, about a mile southwest of Naval Submarine Base Kings Bay.

Errant skydivers landed inside a Navy submarine base in August, prompting a salvo of letters from officers who want the airport moved away. In recognition of the Navy’s concerns, the community of 17,000 people which owns the airport, about a mile from Naval Submarine Base Kings Bay, is studying the feasibility of moving the airport from which the skydivers departed Aug. 12.

Disputes over landing zone locations and operating permits for the local skydiving company had festered for months before that, and for years the Navy has asked the city, state, and FAA to move the airport elsewhere. According to local media, the two errant skydivers were the sixth and seventh to land on the base in three years. Rear Adm. John C. Scorby Jr., the base commander, wrote to the FAA Sept. 4 that those incursions create “significant disruptions” of the mission “and raise the specter of needlessly dangerous reactive responses.”

The same phrase was used in a letter to local government.

The Jumping Place, located on the field, filed a complaint to Georgia transportation officials, who receive such complaints on behalf of the FAA, protesting the local airport authority’s decision to revoke the commercial operation permit based on concern about jumpers landing on the base. (The permit had been restored just prior to the Aug. 12 jump, and was promptly revoked again). The city defended its action in a Sept. 5 letter, arguing that the skydiving operator was “negligent” allowing parachutists to jump in strong winds, with thunderstorms in the vicinity, on Aug. 12.

AOPA Manager of Airport Policy John Collins noted that building a new airport is a massive undertaking, one that can require a decade or more for site selection, acquisition, environmental assessments, grant approvals, and actual construction.

“We understand the conflicts that can arise from these two facilities being close neighbors,” Collins said, noting that AOPA will work with all parties concerned to ensure that local GA access is maintained. AOPA believes that opportunities remain to reconcile legitimate concerns raised by the Navy, the airport, and local pilots.

City Manager Steve Crowell said the city continues to investigate options for relocating the airport. It is not yet clear whether land that was offered by a developer a few years ago, free of charge, is still an option, or if it is even suitable. The land in question would be about 20 miles away, outside city limits in an unincorporated area. Crowell said the local feasibility study remains at an early stage, and the FAA is pursuing “its own process.”

“Our current airport’s a little bit in limbo,” Crowell said, noting that rumors of imminent closure make developers and business owners reluctant to invest in the property. “It would be nice to try and get some resolution.”

The Jumping Place, its permit revoked, vowed to continue operating at another airport.