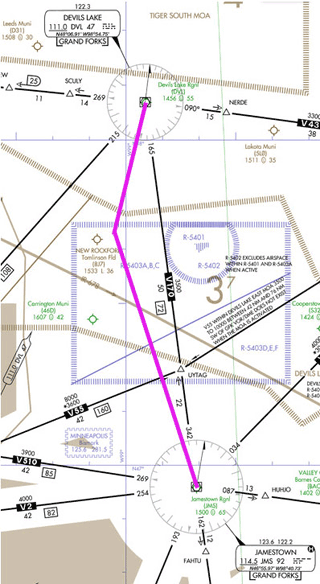 AOPA, responding to the FAA’s proposed modification of an airway in North Dakota to increase its separation from special-use airspace, has recommended that the agency consider alternative solutions consistent with its continuing modernization program.

AOPA proposed the alternatives in formal comments on the FAA’s notice of proposed rulemaking to modify V-170 near Devils Lake, N.D. The modification would create a bend in the airway, and establish a fix identified by the intersection of radials from the Devil’s Lake and Jamestown VORs.

Pilots are urged to study the proposal and submit comments to the FAA by Oct. 22.

AOPA pointed out that the proposed airway change—which would lengthen the airway by about three nautical miles—constitutes a “permanent modification” in response to a “temporary situation” given the manner in which the adjacent restricted airspace is activated.

“Rather than amend V-170, forcing all traffic, both instrument and visual, to circumnavigate special-use airspace (SUA) regardless of its activation status, AOPA urges the FAA to consider alternatives. A global positioning system (GPS) waypoint could be established that air traffic controllers could clear instrument flight rules (IFR) aircraft to in lieu of proceeding on V-170. Alternatively, a T-route could be established in addition to the existing Victor airway that maintains appropriate separation from the SUA,” wrote Tom Kramer, AOPA manager of airspace and modernization.

Dan Namowitz has been writing for AOPA in a variety of capacities since 1991. He has been a flight instructor since 1990 and is a 35-year AOPA member.
Go to Dan Namowitz's Profile
Topics: Airspace, Navigation, Advocacy