Get the app Get the app
Already a member? Please login below for an enhanced experience. Not a member? Join today
News & Media Yves Rossy trains student Jetman 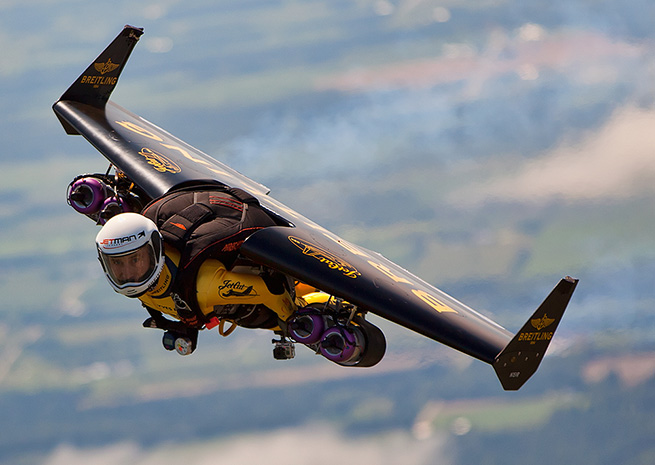 After flying across the English Channel, over the Grand Canyon, around Christ the Redeemer in Rio de Janeiro, and in formation with L-39s, wing walkers, and a DC-3, Jetman Yves Rossy’s dream of flying like a bird is moving to the next phase—training others to do the same.

Rossy revealed to EAA AirVenture attendees Aug. 1 during the evening Theater in the Woods event that he has a student Jetman. Someday, he said, he would like to start a Jetman flight school.

Vincent Reffet, 28, isn’t a pilot, Rossy said. That’s much different than Rossy’s background as an experienced fighter and airline pilot. However, Reffet, a Red Bull athlete, is a world champion parachutist and teaches base jumping.

The first thing Reffet flew was “not an airplane—[it was] the wing,” Rossy said.

“One month ago he did his first motorized flight,” Rossy said as he showed pictures of the event. “So the next step is a Jetman squadron,” he added with a grin.

Similar to students after their first solo, Reffet had a smile stretched across his face after the motorized-wing flight. “You see the banana!” Rossy said of Reffet’s grin, beaming with pride himself. Rossy and Reffet are discussing a training program and how it translates for those who have flown with parachutes but not airplanes. Rossy said he plans to train future Jetman students on smaller wings.

Just don’t look for him to start a flight school in the United States—there’s too much regulation, he told attendees.