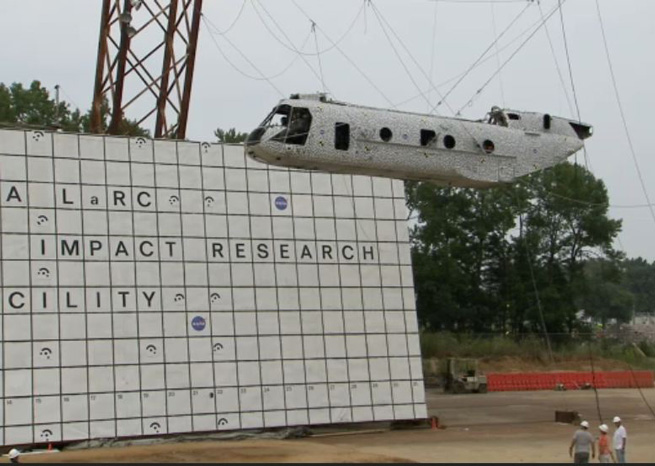 About 6,000 online viewers watched the impact, with nearly 30,000 tuning in during the half-hour webcast. Many viewers who posted comments in a chat window appeared to be disappointed with the lack of obvious drama.

Cameras rolled at the NASA Langley Research Center in Hampton, Va., as the CH-46 fuselage, a retired U.S. Marine Corps Sea Knight helicopter painted white with black polka dots to help high-speed cameras detect deformation, swung down from a height of about 30 feet and hit the dirt. There was no obvious damage or deformity to the airframe.

The aeronautics and space agency collaborated with military, private industry, and FAA researchers to develop new safety systems, and sought to simulate a “serious but survivable” crash. Crunching and crushing was, apparently, not the point: nearly 40 cameras captured images inside and outside the falling fuselage, and accelerometers measured impact forces inside, where 13 test dummies were stationed. NASA reported in a news release this was the first use of a video game motion capture system in a test of this kind, with researchers curious to learn if that technology will be useful in crash testing.

Some of the onboard test dummies were secured with new seatbelts developed by Cobham Life Support-St. Petersburg, a division of CONAX Florida Corporation, and the U.S. Army provided an experimental litter for the test. The goal of the 30 mph crash experiment was to gather data on how these systems performed, and improve safety and survivability. The collaborators hope this research will ultimately lead to more efficient designs, increased carrying capacity, and related improvements. The data will also help improve industry computer models.

NASA plans to follow up with a similar test next year.