Get the app Get the app
AOPA will be closed July 4th, in observance of the Independence Day holiday. We will reopen at 8:30 am ET on Tuesday, July 5.
News & Media Aviation Legends: Walter Extra

Pragmatism and elegance seldom go together. But for 25 years, German aircraft designer and former aerobatic competitor Walter Extra has created a unique combination of unmatched style, performance, refinement, and reliability in an ever-expanding line of composite, aerobatic monoplanes, and his designs have come to dominate international aerobatic competitions and airshows. His latest creation—a sleek, powerful sport aircraft with a 220-knot top speed called the 330 LT—is the world’s fastest, normally aspirated FAA-certified airplane, and it’s selling especially well in the United States.

But Extra has had some high-profile stumbles, too.

In the mid-1990s, he designed and launched a pressurized, six-seat traveler known as the Extra 400, intended to bring the same mix of high performance, advanced materials, and precise handling qualities to a high-flying business airplane. But the project suffered certification delays and engine problems with the liquid-cooled Continental IO-550, and the financial strain nearly sunk Extra’s entire enterprise.

Extra remained convinced, however, that the design was fundamentally sound and could win in the marketplace—if only he could find the right engine. In 2002 he launched the Extra 500, which employs the same airframe, this time built around a Rolls-Royce turbine engine. Extra believes the turboprop delivers on the promise of the original design. He has personally logged hundreds of hours in the prototype, flying it throughout Europe and across the North Atlantic. It’s received European certification, and Extra has applied for U.S. certification as well.

But bitter experiences from regulatory delays and financial setbacks in the Extra 400 program have convinced him to proceed slowly. He won’t take deposits or start production until FAA certification is in hand, and he’ll manufacture airframe components in his German factory with the same skilled workers who make his world-renowned aerobatic aircraft. 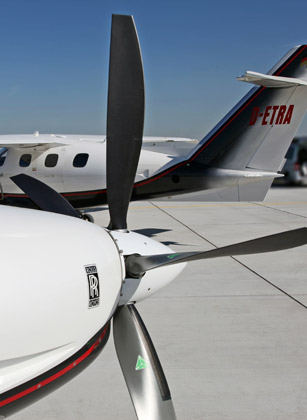 On a recent trip to Southeast Aerosport—the dealership in St. Augustine, Florida, that specializes in selling and servicing Extra aerobatic airplanes—Extra reflected on his aviation career, lessons learned, and goals for the future.

Like many Europeans, he learned to fly in gliders and was drawn immediately to aerobatic flight. His glider instructors encouraged him to seek a powered-aircraft rating so he could focus on aerobatics. He pursued it with dogged determination and began competing in local aerobatic contests.

A mechanical engineer by training, he built and flew a single-seat Pitts Special biplane in the early 1980s. Then he watched U.S. aerobatic legend Leo Loudenslager fly a Laser monoplane of his own design and immediately recognized that biplanes were obsolete. Extra started building his own Laser, which incorporated many modifications that he designed. When he began flying his first monoplane in European aerobatic contests, other pilots recognized its potential and asked Extra if he would build similar aircraft for them.

“I’m not an aeronautical engineer and never intended to become an aircraft manufacturer,” he said. “But I loved the work, I knew I could do it well, and I’ve never looked back.”

His single-seat Extra 230 became a sensation, and the handmade aircraft were recognized as the Stradivarius of aerobatic airplanes for the fine woodwork in their wings, as well as their inherent strength, lightness, and performance.

Extra went on to design a two-seat, midwing aircraft capable of unlimited aerobatics with two aboard, the Extra 300, and won European and FAA certification for the composite aircraft built around a steel frame fuselage. The United States quickly became his biggest market for the 300 and then the 300L, a low-wing design that improved visibility and made it easier to get in and out of the front cockpit. He also built a certified trainer, the Extra 200, with a four-cylinder engine, but it never sold as well as the thirstier, higher performance, six-cylinder models.

In fact, Extra says he’s been mystified by macroeconomic trends during the course of his business life, and particularly their apparent irrelevance to his own business. During boom times, busts, and wild swings in avgas prices and aircraft values, his company produces and sells about three new aircraft a month. 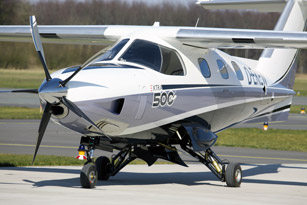 “I’ve studied the trends and looked closely at the numbers for nearly 30 years,” Extra said in lightly accented English. “And there’s just no correlation between macroeconomic trends and my aircraft manufacturing business. During good times and bad times, my orders are steady. The broader economy doesn’t seem to matter.”

Extra’s 75-employee aircraft factory is located in a semi-rural area just outside Germany’s industrial Ruhr valley. There’s typically about a six-month backlog. Roughly half of the aerobatic airplanes Extra sells go to the United States and the rest are divided between Europe and Russia, with a few going to Australia or South America. (The Chilean air force demonstration team has long flown Extra aircraft.)

Extra says he’s confident the Extra 500 will do well here, too.

The 450-shaft-horsepower Rolls-Royce is smaller than the Pratt & Whitney PT6 and Honeywell turbines that power competitors such as the larger, higher-flying TBM, Piper, and Pilatus airplanes that dominate the category. Extra feels there’s room for a less expensive, more fuel-efficient aircraft that flies below RVSM altitudes but is still capable of covering up to 1,000 nm when fully loaded.

“The Rolls-Royce engine delivers on the promise of the original design,” he said. “I’ve flown the 500 extensively, and people are going to be amazed at its low pilot workload, ease of handling, and reliability. It takes things we’ve learned from decades of experience in producing aerobatic airplanes and transfers them to an entirely new category of aircraft.”