Get the app Get the app
News & Media Performance Bonanza

PT6 power lights a fire in the staid B36TC 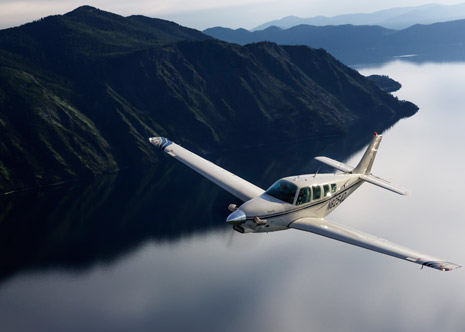 For nearly 25 years, Rocket Engineering has infused mundane airplanes with blistering performance enhancements. It all started in 1989 when Rocket began adding turbos to Mooneys. Later, the company began dropping huge engines in the noses of Mooneys, creating the popular Rocket and Missile conversions. Since then, Rocket has shifted to turbine conversions, realizing that avgas for piston engines may someday become extinct.

Rocket Engineering’s most popular mod is the JetProp DLX conversion of the Piper Malibu and Mirage, which replaces the piston engine with a Pratt & Whitney PT6. It has attracted customers here in the United States and especially in countries where avgas is prohibitively expensive or simply not available. Recently, Rocket President Darwin Conrad has turned his attention to Beechcraft airplanes, notably the Bonanza B36TC and Duke models. We reviewed the Royal Turbine modification of the Duke (“Turbine Pilot: Ruler of Performance,” August 2007 AOPA Pilot) and were impressed to see the Duke’s performance match its dashing looks.

The least expensive mod to emerge from the Rocket hangar is the TurbineAir, marketed under an offshoot company known as West Pacific Air LLC. The $450,000 conversion can be applied only to the longer-wing Bonanza B36TC, which was produced by Beechcraft from 1982 to 2002. As expected, dropping a 500-shaft-horsepower PT6 in the nose of a Bonanza creates a real performer, and solves many of the problems that plagued the B36TC. It should be noted that this airplane is not the same as the Tradewinds Turbine Bonanza conversion, which utilizes a Rolls-Royce/Allison turboprop and was available only for the A36.

Originally powered by a 300-horsepower Continental TSIO-520-UB, the B36TC is plagued by lackluster climb performance and a hot-running engine installation (“Turn of the Century Bonanza,” January 2000 AOPA Pilot). A climb to Flight Level 250 in a stock B36TC is an agonizing 45-minute affair during which the pilot has to deftly manage fuel flow and airspeed in order to keep cylinder head temperatures in check. In the low 20s, the B36TC is a 200-knot cruiser on about 17 gph, but the trip has to be a long one to justify the slow climb. 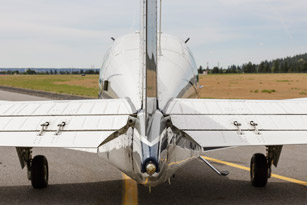 West Pacific’s TurbineAir wipes out the sluggish climb and turns the B36TC into a comparative screamer, from the runway to the flight levels. On the day of our test flight, it was a warm 82 degrees Fahrenheit at Rocket headquarters on Felts Field in Spokane, Washington. With two on board and 110 gallons of fuel, the TurbineAir was already at its max takeoff weight, giving evidence of the design’s limited useful load. Even with a 3,900-foot density altitude, the TurbineAir didn’t disappoint in the acceleration department. After 1,000 feet of runway, we were rotating into a 15-degree pitch while holding 100 knots. Initial rate of climb settled between 1,700 and 2,000 feet per minute. And the TurbineAir will maintain that rate of climb right up to FL180. In fact, we scampered up to 17,500 in just 10 minutes.

After leveling off, the airplane quickly reached its max cruise airspeed of 171 KIAS, resulting in 230 KTAS while burning 30 gph. “This is where most pilots will fly the airplane,” says Conrad. It’s the maximum altitude that you can legally fly without using obtrusive oxygen masks, and the fuel flow versus true airspeed payoff is good. 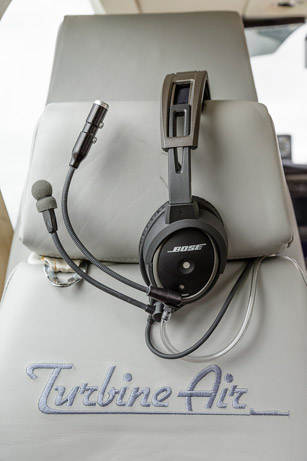 We then strapped on the masks and climbed to FL230. Above FL180, the engine became temperature limited instead of torque limited, and climb rate eventually fell to a still-respectable 1,000 feet per minute. Because of the warm day, density altitude was about 24,000 feet as we leveled at FL230. The TurbineAir accelerated to 243 KTAS on 30 gph. On cooler days at FL250, 250 KTAS should be attainable.

Of course, since it’s still a Bonanza, the aircraft’s handling makes it a joy to hand-fly. Pitch and roll rate are crisp, and all that’s needed is fingertip control. Likewise, the turbine is nearly vibration free. At high-speed cruise power settings, the airspeed is always at the redline, although overall noise is not much different from a standard Bonanza.

Since it’s not pressurized, descent planning is critical in the TurbineAir. In the thin air of altitude, descending about 1,500 fpm was not too hard on the ears. To remain comfortable below about 6,000 feet, we had to reduce the rate. Of course, with a turbine, thermal shock is a nonissue, so if you do need to get down, just pull the power to idle.

Another popular altitude for this airplane is 12,000 feet, where short trips without oxygen can be made. High-speed cruise at 12,000 delivered 210 KTAS on 33 gph. Reducing power to 500 pound-feet of torque resulted in 175 KTAS on 26 gph. Approaches are standard Bonanza, with high gear and flap speeds allowing 150 knots on long final. However, it doesn’t slow down as well as a twin turboprop, because there’s only one propeller acting as an air brake. But landings can be made in less than 1,000 feet thanks to reverse thrust.

Like most piston-to-turbine conversions, the TurbineAir suffers from limited fuel capacity and useful load. Rocket has partially solved the fuel issue by locating areas of the wing where it can insert extra bladders, which feed directly into the main tanks, bringing fuel capacity up to 124 gallons usable. Useful load is a little bit harder to come by, but Rocket has found areas to trim weight, most notably in the form of a composite MT propeller that shaves 38 pounds off the empty weight. In all fairness, however, the stock B36TC is no heavy hauler itself, with a full-fuel payload of around 400 pounds. Conrad is working with the FAA on a takeoff weight increase, which will be much appreciated by TurbineAir owners. 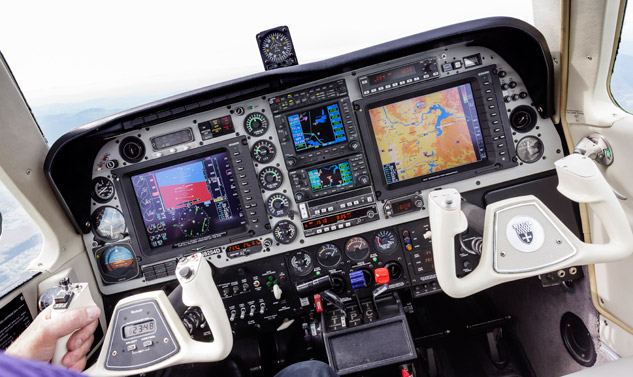 The fuel system consists of the B36’s standard 102-gallon-usable wing tanks. Rocket then adds seven gallons in each wing, as well as a 12-gallon (eight usable) header tank that resides between the wing spars. Because of the header tank location, the TurbineAir’s rear passengers are essentially forced to sit in the club configuration because the tank fills the footwell between the front and middle seats. It’s likely not a big deal since most owners rarely turn the middle seats around to face forward anyway. Having fuel reside in the cabin is a little offputting, but Rocket found the best place for it, since any accident that compromises a tank in that location would likely be fatal anyway.

Partial fueling is easy with the combination of direct-reading sight gauges and separate fueling ports. And if you want to carry any sort of load in the cabin, partial fueling will be required. With three adults and some luggage, you could load 80 gallons of Jet-A and fly a 400-nm trip at high-speed cruise or close to 500 nm at lower power settings.

Of course, the owner of a TurbineAir will have to carefully balance the capabilities of the airplane with the real-world ability to climb directly to altitude, cruise in the thin air, and plan an optimal descent to maximize efficiency. In rural environments this can be done, but it will be a challenge in urban areas where step climbs and early descents are the norm. 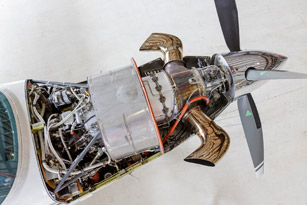 Conrad has found that the Bonanza’s rugged build and stout landing gear make it better suited for short/rough-field operations than the JetProp Malibu many of his customers are using in other countries. It provides nearly the performance as the JetProp in a far more rugged, albeit unpressurized, package.

With the added gross weight, the airplane is now certified as a Normal category airplane instead of the original’s Utility category certification. In daily operation, this will likely only be noticed by the lower maneuvering speed of 130 KIAS instead of 141 KIAS in a stock B36.

Since turbine-powered airplanes don’t have a max structural cruising speed (denoted by the beginning of the yellow arc on the airspeed indicator), the FAA requires that VNE (the redline) be placed where the beginning of the yellow arc was. Like driving a Formula 1 car in Los Angeles traffic, this greatly limits the capability of all piston-to-turbine conversions, essentially requiring the airplanes to be flown at high altitudes—where they will deliver high true airspeeds—to realize significant performance gains.

At high-speed cruise power, the TurbineAir essentially is bucking against its redline from sea level up to its ceiling of FL250. If you want to fly below 10,000 feet, this is not the airplane for you. 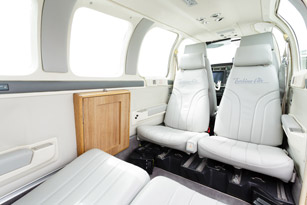 In the long run, the cost of operating the TurbineAir won’t be much different than the care and feeding of a light twin like a Baron 58. Fuel burn is similar, but Jet-A is less expensive than avgas. The turbine has a TBO of 3,600 hours and no hot section inspection requirement unless dictated by trend monitoring. But at a $125,000 overhaul cost, the turbine will still require about $15 per hour more in engine reserves than the Baron’s two Continental IO-550s. Our calculations reveal an average hourly cost of operation of $252/hour if flown 200 hours per year, including hangar, insurance, and maintenance costs.

The TurbineAir brings performance, reliability, and the hallmark Beech handling into a family-sized package. It delivers the speed of a twin turboprop, like a Cessna Conquest I, on less than half the fuel. It can use any runway, of any surface, longer than 1,500 feet. It also inspires confidence with a powerplant that’s many times more reliable than the piston engine it replaces. Finally, there’s none of the complexity and workload involved in multiengine operation, a typical price to pay for this level of performance.

Like all airplanes, the TurbineAir has its trade-offs. Its lack of pressurization is a big impediment, as are the skimpy useful load and range. If more of those are needed, the company will be happy to upgrade you to its Royal Turbine conversion of the Duke—or the yet-to-be-certified Cougar Baron conversion of the Baron 58P.

For more information: See the West Pacific Air website.
All specifications are based on manufacturer’s calculations. All performance figures are based on standard day, standard atmosphere, sea level, gross weight conditions unless otherwise noted.
Extra: The TurbineAir’s exemplary takeoff and climb performance make it a much better neighbor in terms of overflight noise compared to a stock Bonanza.

Pete Bedell is a pilot for a major airline and co-owner of a Cessna 172M and Beechcraft Baron D55.
Go to Peter A. Bedell's Profile
Topics: Aviation Industry, Training and Safety, Technique
X