Get the app Get the app
AOPA will be closing at 2:30 pm ET on Friday, May 27, 2022, in observance of Memorial Day. We will reopen at 8:30 am ET on Tueday, May 31, 2022.
Already a member? Please login below for an enhanced experience. Not a member? Join today
News & Media Atlanta&rsquo;s Class B airspace changes take effect March 7 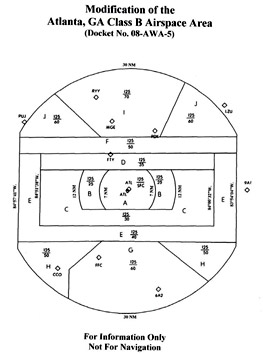 A new configuration of the Class B airspace in Atlanta, Ga., that takes effect March 7 will mitigate many of the concerns expressed by general aviation pilots during the airspace redesign process, AOPA said.

Overall, the new airspace rule contains positive responses to comments submitted during the rulemaking process, including reducing the potential for traffic compression in the vicinity of DeKalb-Peachtree Airport, placing another satellite airport outside the Class B airspace’s eastern boundary, and providing for a variety of VFR navigation options around the Class B area.

The final airspace design set the Class B floor at 7,000 feet mean sea level above DeKalb-Peachtree, down from the present 8,000-foot-msl floor but 2,000 feet higher than the reconfiguration’s earlier design. The FAA noted in the final rule that the change would still satisfactorily accommodate departures from Hartsfield-Jackson Atlanta International Airport.

Reduction of the overall airspace footprint will place Covington Municipal Airport outside the Class B airspace’s eastern boundary at its location 29 nautical miles from the Atlanta VOR.

The final airspace rule also discussed the FAA’s intention to establish VFR waypoints and reporting points to assist VFR navigation, and to establish VFR routes that can be used to circumnavigate the Class B airspace. Those waypoints, when available, will be published on the Atlanta Terminal Area Chart, said Melissa McCaffrey, AOPA senior government analyst for air traffic services.

The FAA is also working toward establishing RNAV terminal routes (T-routes) for transitioning IFR aircraft. Those routes are now being designed, the FAA said.

“AOPA was actively involved throughout the airspace modification process, as it has been nationwide, and looks forward to the opportunity to provide input on the T-routes being established,” McCaffrey said.

Members are encouraged to become familiar with the details of the airspace reconfiguration (see graphic) and to prepare for the changes prior to the March 7 effective date.

The March 7 effective date aligns the changes with the charting cycles for the Atlanta terminal area and sectional charts.

Dan Namowitz has been writing for AOPA in a variety of capacities since 1991. He has been a flight instructor since 1990 and is a 35-year AOPA member.
Go to Dan Namowitz's Profile
Topics: Airspace, Airspace Redesign, Advocacy