Get the app Get the app
Already a member? Please login below for an enhanced experience. Not a member? Join today
News & Media David Clark: 70 years of flying under pressure

Perched at the edge of a capsule 128,100 feet above the Earth, Felix Baumgartner marveled at how small it all looks, waved, bent his knees and dropped into space. He broke the sound barrier in seconds, protected from a near-vacuum that would have boiled his blood in an instant only by a David Clark Co. pressure suit.

Local reporters would later ask company officials if they had been anxious or nervous during the record-setting plunge. How to answer that? To deny it would be to deny what becomes a very personal relationship between the select few who venture into the most hostile environments possible, and their highly specialized tailors.

“We’re very fortunate in this business, because astronauts and aviators are our friends and we take our job to protect them very seriously. We want them to go home at night and see their families,” said Daniel M. Barry, vice president, director of research and development, and a 25-year veteran of the company. “It is a very, very personal thing.”
Still, this was far from their first dance.

The Worcester, Mass., company occupies a towering brick textile mill with vaulted ceilings and hardwood floors worn to a patina that only a century or more of working feet can produce. (The company, founded across town, is not the original tenant.) Skilled workers have made, by hand, protective clothing for extreme high-altitude pilots and astronauts far longer than the distinctive green headsets that are assembled on a floor below. It is what the company is best known for in aviation circles, perhaps the only headset in general aviation that can be identified by manufacturer from a hundred feet away, or more—headsets they didn’t start producing until 1975, a relatively recent addition to the product line.

As a crowd of companies strives to shoot paying customers into space, David Clark is preparing for new business that will almost certainly come from somewhere. NASA had contracted David Clark and a Texas firm to build the next generation of suits for missions beyond Earth orbit, though that project, dubbed Constellation, has been halted pending decisions on mission specifics. In a room where pressure suits are tested and fitted, a collection of brown suits hangs from a rack, designed particularly for the coming generation of tourists, scientists, and other commercial “space flight participants,” suits that are suitable for wear on the launch of a lifetime, and able to save a life if the cabin pressure drops unexpectedly.

“You have to wear something,” Barry said.

‘A doubling of the kill rate was persuasive’ 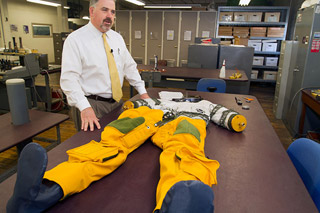 David Clark Co. Vice President Daniel Barry, director of research and development, describes some of the layers of a suit being produced for U-2 pilots.

The company history is on display in production areas and offices alike, glass cases preserving specimens of an aerospace catalog that dates to World War II.

David M. Clark convinced his father to allow him to drop out of high school in his junior year in exchange for agreeing to take night classes, and further convinced his father to help fund a start-up textile company. David Clark Co. was founded in 1935, and specialized in seamless weaves and form-fitting fabrics, producing a variety of “foundation garments,” as Barry described them, eschewing the word “underwear.” David Clark made the “Sears Best” brassiere through the 1950s, among other products.

When Clark learned pilots were blacking out as they pushed the latest aircraft to the limits, he had a hunch that a tight squeeze might be just the thing. He stitched the inflatable inner bladder from a football to the abdomen of a man’s girdle (the “Straightaway”), and had a traveling salesman deliver it to the War Department in 1940. It was rudimentary, but a promising enough prototype to draw interest. He was soon locked in an intense competition to solve the blackout problem, and save lives—a competition he would win. 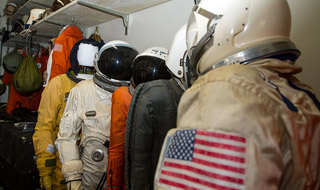 A David Clark Co. storage closet contains a sampling of the many pressure suits and G suits the company has made over the years, including outerwear for Space Shuttle astronauts and U-2 pilots.

Making an effective suit was one thing, but getting pilots to use it was another. Early versions covered the entire body, and were so stifling in hot environments that pilots chose to take their chances with G forces. Clark ultimately prevailed by cutting away portions of the fabric not needed to support the compressive bladders that forced blood to the upper body and head. But it was kills, not comfort, that closed the deal: Protection from blackout or grayout made a difference in dogfights. A P-51 Mustang fighter group of the Eighth Air Force reported that pilots wearing Clark’s G-3 (the third generation) shot down 67 enemy aircraft per 1,000 operational hours, compared to 33 combat kills for unprotected pilots.

“A doubling of the kill rate was persuasive,” writes Dennis Jenkins in Dressing for Altitude , a NASA e-book released in 2012 documenting the history of pilot and astronaut protection, in which Clark is featured prominently. (The forward is by Jack Bassick, a director of the David Clark Co. who previously held Barry’s job.)

Clark drew on the talents of superbly skilled seamstresses, engineers, aviators, and scientists to create a basic design that is fundamentally the same as what is still used today. Key components of modern suits, such as the valve that responds to G forces and controls the flow of pressurized air in and out of the suit, owe much to David Clark Co.

After the war, Clark began pursuing pressure. The hyperbaric protection he created served pilots throughout the X-plane generation, and the Mercury program. NASA would bring other manufacturers into the mix (in some cases, the company has taught the methods of manufacture to others to create competition), though David Clark Co. has continued to supply a variety of specialized suits for missions through the Space Shuttle program, and beyond. SR-71 Blackbird pilots wore David Clark suits, and the U-2 program remains a steady customer to the present day—skilled craftsman turn out four of those suits a month. There are 12 sizes made, and 2,800 piece patterns are required to produce appropriate attire for ultra-high-altitude flight.

“Everything that we do here is done by hand,” Barry said. The gloves of Baumgartner’s pressure suit were stitched with precision, seams held to a tolerance of plus 1/64 inch, minus zero. “There’s a great degree of art that goes along with the science in developing these suits.” 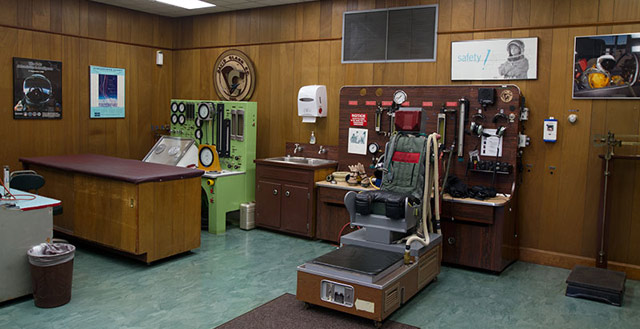 David Clark Co. pressure suits are tested here, in a room that includes a mockup of the U-2 ejection seat and connections.

‘Why we come in every day’

While there was a great deal of confidence that those seams would hold as Baumgartner hurtled into history, the real challenge of making his suit came from the unique requirements of skydiving above virtually all of the atmosphere. Baumgartner would not return to his family, waiting anxiously below, if he failed to control his body, and he had precious little wind resistance to work with. A flat spin was the worst-case scenario, Barry said. “It’s actually a fatal occurrence.”

U.S. Air Force Col. Joseph Kittinger, who leapt from 102,800 feet in 1960, setting the previous record, nearly lost his own life on a 1959 jump when a flat spin subjected his body to 22 Gs. An automatic parachute saved his life, and a signed photo of Kittinger, inscribed with a message of thanks for the pressure suit, is among the collection hanging on the wall where pressure suits are still made today.

Kittinger set a record and survived to serve in Red Bull Stratos mission control, the lone voice communicating with Baumgartner during his long ascent. That mission, Barry said, was also for science, not just thrills (or the robust marketing campaign that now uses those images). Barry and his staff occasionally field calls from would-be daredevils eager to get their hands on similar equipment, and they are always turned away. The data gathered on the Red Bull mission will help Barry and his staff design the next generation of suits.

“Any time we can learn something to advance the state of the art, perhaps help future generations of astronauts and aviators, that’s why we come in every day.” Barry said. 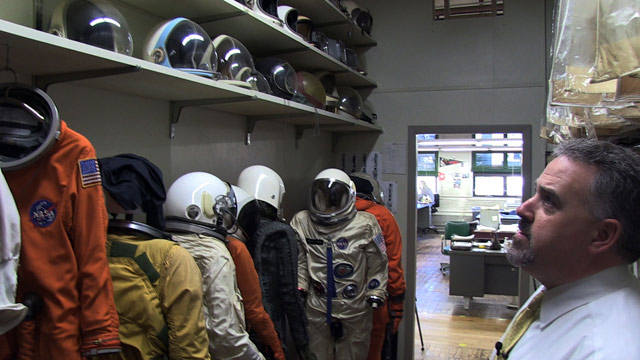 In addition to developing specialized textiles, David Clark Co. has a long history of also producing the helmets and other accessories. Company engineers use this room as a reference; it is also a compact museum of American aerospace.

David Clark Co. holds the patent on a special fabric used for the inner lining that contains pressurized, breathable air, but allows moisture to escape, making life at the edge of space much more comfortable, and less sweaty. Barry said the company is watching with interest as a commercial space industry prepares to dramatically expand the ranks of humans who have flown in space. The coffee-colored Contingency Hyperbaric Astronaut Protection Suit (CHAPS) hanging in a testing room that also houses a mockup of a U-2 ejection seat is ready, and Barry said the company is talking with every company in the hunt for low earth orbit, and beyond. He said it may take a while before this new market really gets going.

“Most of the companies are still struggling with basic physics problems,” Barry said. Most of the companies have also been provided a prototype of this sophisticated outerwear, and Barry has a polished pitch: “Our job is to provide something that affords a level of protection, but doesn’t intrude on the experience,” Barry said, adding the CHAPS is “extremely lightweight,” and “very, very comfortable.”

It even has pockets to carry mementoes, or a small camera, skyward, the importance of which is not to be underestimated. Pockets, after all, were one of the innovations that helped sell World War II combat pilots on those old G suits in the first place.

Vice President Daniel Barry is well-versed in David Clark Co. history, able to recount the details behind milestones captured in photos on the factory wall like this, one of the first G suit designs. 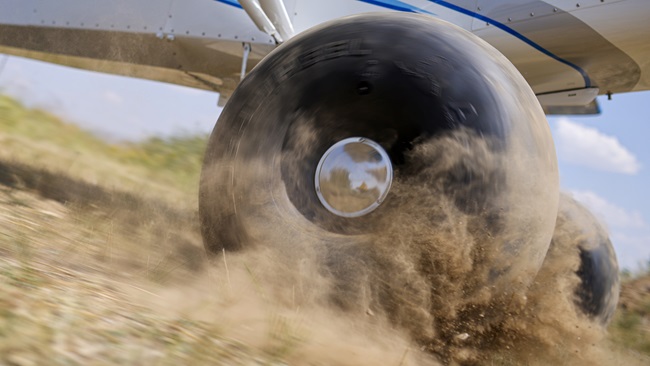