Get the app Get the app
News & Media Staying alive: Survival training for after a ditching

Staying alive: Survival training for after a ditching

Shivering and panting in the waters just off the Southern California coast, I gripped the white straps of the life raft ladder, found the lowest rung with my foot, and paused. My heart was still racing from hitting the 65-degree water—warm by ocean standards, but cool enough to trigger the gasping reflex and rapid heartbeat of cold shock response—and I knew I must stay calm. I pulled hard, leaned forward, and splashed head first onto the floor of the raft. Still shaking, from cold or adrenaline or both, I threw the ladder back over the side and extended my hand to the next poor soul to rise out of the chilly water.

The tented canopy of the raft blocked the wind as well as the view to the Gypsy Moon, a 41.5-foot boat serving as the training vessel for the H2O2 Foundation’s Self Rescue Techniques for Pilots class. After a ground lesson on preparing for and surviving a ditching of a small aircraft, we left Dana Point Harbor, took the plunge, and jumped from the stern of the Gypsy Moon. In the orange glow of the canopy, I was grateful that if I ever do face the prospect of a forced landing on water, I’ll at least have an idea of what’s ahead.

With miles of water in every direction, your engine quits. You’ve made your distress call. What now?

“You have 30 seconds to organize your mess,” said instructor William Pass, a certified lifeguard and training captain for turboprops. “If you can’t have it in a minute, it’s not survival gear,” he later added. At best glide speed, most light aircraft travel in the range of one nautical mile per minute, he explained, and you’ve got only minutes until impact. In that time, you’ve got to make your distress call to alert search-and-rescue teams of your position, plan your touchdown point, and get ready for a textbook landing. Personal flotation devices and a survival kit should be easily within reach—they won’t do you any good if they sink with the airplane.

That’s not to say that ditching or climbing out of a sinking aircraft is easy; it takes preparation, skill, and maybe a bit of luck. But Pass noted that the slower approach speed of smaller aircraft actually improves one’s chances of surviving a ditching; the course foregoes the topsy-turvy underwater egress training of classes designed for corporate pilots and police departments, and instead focuses on what to do once you make it out. Pass said that H2O2 (a mashup of water and oxygen, he emphasizes in response to puzzled looks and questions—not hydrogen peroxide, as most are wont to assume) started with pool courses and then decided to venture into the ocean. 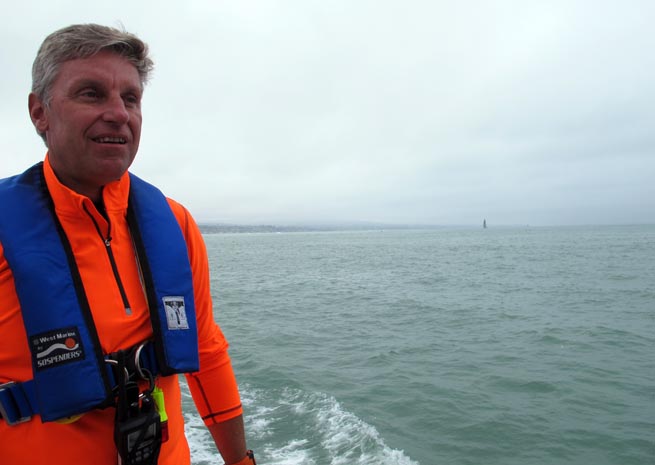 Keep calm and carry on

We jumped one by one from the boat, and resurfaced gasping. Water below 80 degrees can cause the cold shock response, explained instructor Tina Dittmar in the ground lesson: gasping, difficulty holding breath, rapid heart rate, and loss of function in the water. In 65-degree water, I could feel my heart racing, even wearing a shorty wetsuit for the exercise. Colder water can quickly become debilitating: Dittmar showed the group a graph that plotted the exponential increase in survival time as temperature increased.

As shock sets in, the body shuts down the extremities first, pulling blood to the heart and lungs. Panic affects the ability to think, so even concepts such as left and right become confusing, Dittmar said. “Your decision-making process has been and will be hijacked,” she said. She instructed attendees to simplify what they’re thinking about.

My goal: Swim around the boat. It seemed such a short distance, but progress was surprisingly slow. I was still short of breath, and while I was grateful for the Type II personal flotation devices we each wore, I felt constricted. Even the experienced diver of the group noted that swimming in the vest was more difficult.

The short swim around the bow drove home the value of another type of preparedness: physical fitness. It seems like stating the obvious to say that you’ll have a harder time treading water for hours if you’re not in good cardiovascular shape, but I haven’t seen a gym membership cited as a crucial part of anyone’s emergency preparedness kit.

Even fit ditchers are wise to stay close to the ditching site. Distance can be deceiving on the water, Dittmar warned, and one mile equates to about 66 laps in a 25-meter pool. In 50-degree-Fahrenheit water the average person wearing a life vest and light clothing can swim 0.85 miles before becoming incapacitated by hypothermia, she said.

We practiced the heat escape lessening position (HELP), which is more or less the fetal position with one’s head above the water, and quite natural for someone who has been unceremoniously dunked in the ocean. For even more warmth, we huddled together. Then, we got to escape the cold water into the relative warmth of the life raft—once we flipped it over. The Winslow raft had straps that enabled us, after a concerted effort, to turn it right-side up, where it landed squarely on the head of Van Nuys FAA Safety Team Program Manager and course participant Karla Borden. After confirming everyone was above the surface and OK, we began the task of climbing into the protected space of the life raft.

It’s easy to see how an injury could make it impossible to tread water high enough to reach a strap or to hoist oneself into the raft. In a best-case scenario, a pilot ditches in warm water (80 degrees Fahrenheit or higher), is equipped with flotation devices, has no injuries, and is in fair weather—and has communicated with authorities. Otherwise, it could be a long wait. 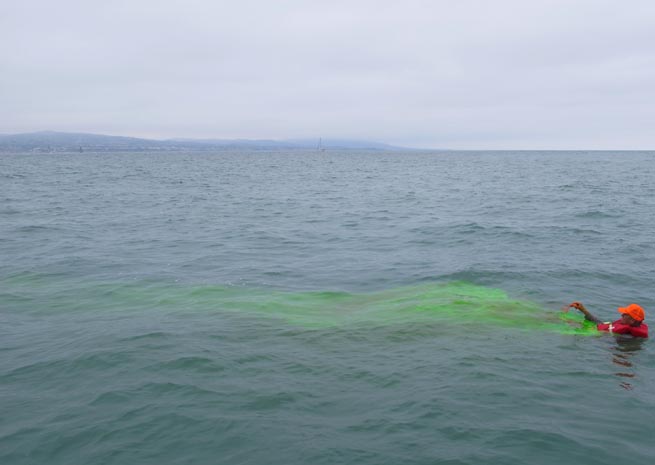 Luck comes to the prepared

For the best chances of early rescue in a ditching situation, should a pilot stick with a 121.5 MHz ELT or spring for the 406 MHz model?

The question is moot, Pass said. In a ditching, the impact shouldn’t be enough to trigger the emergency signal; and even if it does go off, it won’t be long before it’s sitting at the bottom of the ocean or lake. Instead, he recommended carrying a personal locator beacon, which can be carried on one’s person and is activated manually.

Make a distress call and establish a last-seen point before you touch down, but don’t bank on calling 911 from offshore—better to keep the phone number of the Coast Guard or harbor patrol, Pass said, to reach the people who will be responding. He also recommended carrying a marine VHF radio to contact the Coast Guard (and any nearby boats) directly on Channel 16.

If no one knows you’re there, it could be a long wait in cold water. Even with a flight plan, the search won’t begin until 30 minutes after the flight plan expires—and then it is by radio and telephone. Search-and-rescue forces may not be activated until three hours after your estimated time of arrival, and the search area may be quite broad. Your odds improve if you’ve been in communication with ATC, an AFSS, or anyone else along the way, and if you’ve made a Mayday call, particularly with an accurate location.

Planning and practice can improve your odds if you have to ditch; the will to survive can help you beat them. Course participants watched a news report of a pilot who tread water for 18 hours, without a life vest, 17 miles from shore in Lake Huron before people on a passing boat pulled him aboard. The pilot reported spotting a smoke stack and trying to make his way to it. Dittmar said this may have kept him oriented, given him a goal—and kept him alive, against all odds.