Get the app Get the app
AOPA will be closed July 4th, in observance of the Independence Day holiday. We will reopen at 8:30 am ET on Tuesday, July 5.
News & Media Electric aircraft poised to reach market 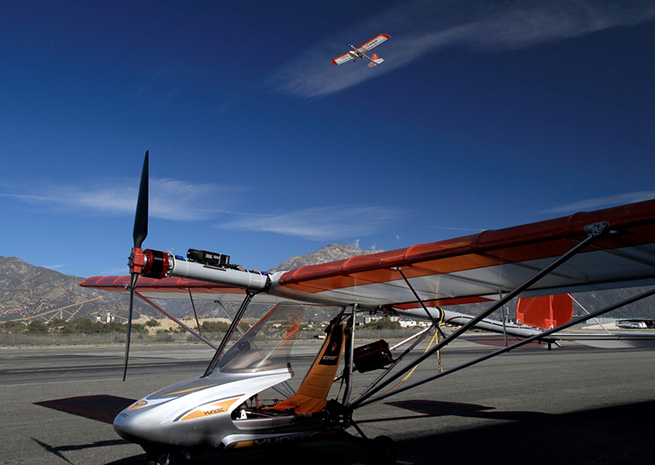 The flying characteristics of the single-seat eSpyder will be familiar to pilots who have flown ultralights—lots of stability, rudder with just a touch of aileron pressure to turn. What will be unfamiliar to all but balloonists, however, is the sound of silence.

“I could hear the bulldozers, I could hear the beeping of the trucks backing up … I could hear the cars on the ground as I was flying overhead, 1,000 feet up,” recalled Eric Bartsch, a pilot and consultant who is working with GreenWing International to bring the all-electric aircraft to market. “You can also hear the other airplanes approaching the pattern. Your ears can be used to hear the traffic around you.”

Bartsch is among the first to test the eSpyder, an updated version of the Flightstar single-seat electric ultralight designed by Tom Peghiny in South Woodstock, Conn. GreenWing also plans to bring a two-seat variant to market, the e430, which was also introduced at EAA AirVenture 2009 by Peghiny (president of Flight Design USA), who later sold the designs to the powerplant maker, Yuneec (pronounced “unique”), based in China.

Peghiny remains a consultant to GreenWing, and noted that eSpyder was certified as an ultralight by German aviation officials in March, following extensive testing.

Peghiny said that the battery technology—lithium ion—is more advanced than the lithium polymer technology he used on the early models introduced in 2009. “It’s going to be a nice product.”

Bartsch said the eSpyder retains many of the airframe design features of the original, though engineers have made significant updates to the control systems.

“We’ve worked very hard on the electronics that are in that speed controller,” Bartsch said. “That’s one of the things that we’re really proud of.”

Both eSpyder and the two-seat e430 being developed for either the kitbuilt or light sport aircraft market will include a full airframe parachute. Bartsch said no decision has been made on which path to U.S. certification the two-seater will take. Much depends on the speed with which the FAA modifies light sport aircraft regulations (which currently stipulate a reciprocating engine) to accommodate electric aircraft.

Performance numbers are still preliminary, pending further refinements that may be made prior to eSpyder’s introduction in Oshkosh, Wis., when the sale price of the kit version will be disclosed and demonstrators will be flown daily (weather permitting). Bartsch said the test model he flew stalled at about 28 mph, and can cruise anywhere from 31 mph to 43 mph, and perhaps faster. More speed translates into less endurance; a typical flight can last up to an hour on a full charge. Bartsch said the test teams use a fast charger (240 volts) able to recharge the battery in two hours following an hour-long flight. A 120-volt charger can get the job done overnight. VNE will be about 62 mph, Bartsch said.

The maximum takeoff weight of the eSpyder—again, preliminary—is 671 pounds, including 220 pounds of payload. Since there’s no fuel, “that’s all pilot,” Bartsch noted.

Bartsch said eSpyder will be primarily aimed at the recreational aviation market, designed to appeal to pilots who seek a low-cost, nearly silent set of wings. Test pilots have been able to yell to—and be heard by—spectators on the ground just after liftoff, with the 24-kilowatt motor (roughly equivalent to 33 horsepower) dialed up to climb power, a feature they are eager to demonstrate at EAA AirVenture.

Operating cost may also be trimmed with the development of a solar-panel charging system. Bartsch said the technology is already available to install a solar array on top of a hangar that would be large enough to charge the battery overnight, and that option is being explored. As for ongoing maintenance, the batteries should be able to sustain 500 cycles, Peghiny said. An engine overhaul would otherwise be very simple.

“We’re still working on what it means for a TBO on that motor,” Bartsch said. “It may be as simple as open it up, inspect the parts, and put two new bearing sets in and put it back together.”

Bartsch said flight testing on the two-seat e430 should begin soon, and more information on that model will be forthcoming. The new e430 is significantly updated from the version Peghiny unveiled in 2009, Bartsch said.

“There will be significant new information on the e430 coming soon,” Bartsch said. “Our preference is to prove it first, and then talk about it.”