Get the app Get the app
AOPA Members DO more LEARN more SAVE more - Get MORE out of being a pilot - CLICK HERE
News & Media Dogfight: Twin versus single

Don’t give me double trouble 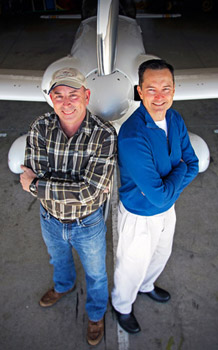 With two starters, four magnetos, 12 cylinders, and 24 spark plugs, it’s a minor miracle that piston twins manage to fly at all.

A lot of cantankerous machinery needs to operate in perfect harmony just to get a twin airborne. And when things go wrong—such as in-flight engine failures—history shows piston twins are no safer than afflicted singles. In fact, engine failures that result in accidents are more likely to be fatal in twins.

That soothing rumble and hum of a second spinning disk may make pilots and passengers feel good. But chocolate-covered raisins do the same thing for me, and “happy food” has as little to do with the successful outcome of most general aviation flights as a second engine.

We all know about asymmetric thrust and how it can contribute to loss-of-control accidents in twins, particularly when an engine fails at low altitude and high power just after takeoff. And we’ve all heard the old saw about how the second engine is only there to take multiengine pilots “to the scene of the crash.”

But piston twin shortcomings don’t stop there. Single-engine service ceilings on many light twins are well below IFR MEAs (and even terrain) in much of the western United States. Also, multiengine fuel systems can be confusing, especially when pilots are under duress during engine-out emergencies that may require cross-feeding fuel to an engine on the opposite wing. And even when everything is fine, visibility can be woefully limited.

Twin fans like to point to redundant alternators and vacuum pumps as advantages. But many modern singles have standby alternators (or electron-saving essential buses), and glass-panel avionics (new or retrofit) that are more reliable than any mechanical AI. Electronic engine monitors (and oil analysis) can provide early warnings of impending engine trouble.

My friend Pete Bedell believes he’s doing his engines a favor by babying them at low power settings—but that’s a dubious claim. The longest-lived piston engines can be found on hard-working primary trainers because frequent flights contribute to their longevity, not kid-glove treatment. An aged piston twin that flies irregularly (like so many these days) is double trouble.

There are some intriguing experimental twin designs such as Velocity’s V-Twin and Burt Rutan’s wild-child Boomerang that seem to deliver real performance and safety advantages, but neither has advanced beyond the proof-of-concept stage. The kit AirCam is a unique aerial platform and a joy to fly on land or water, but it’s meant for exploration and recreation rather than transportation.

At a time of painful fuel prices, piston twins are anachronisms—and the open market judges them harshly. New Barons and Seneca Vs are produced in extremely low volume. And the value of a used single-engine Bonanza often surpasses that of twin-engine Barons of the same model year.

Until a piston twin can do what twin turboprops have long done (namely, climb at max gross weight on one engine), piston twins will be increasingly marginalized, sidelined, and overshadowed by singles that fly at similar speeds and altitudes with far greater efficiency and reliability.

With performance on tap

By Peter A. Bedell

What lunatic sticks up for twins when fuel is $6 per gallon? Bear with me. Although painful at the pump, twins bring their owners tremendous operational flexibility, load-carrying ability, redundancy, and—yes—even safety when in the hands of a well-trained pilot.

There was a time when pilots were regularly killing themselves in twins in the name of training. After the FAA cracked down on training buffoonery, those accidents largely stopped. In normal operations, a twin spends only a few seconds of every flight in that critical regime from liftoff to about 400 feet agl where an engine failure is a serious problem. The entire flight in a single is critical. I surmise that Mr. Hirschman’s hairstyle came from constantly worrying about what to do when his one motor quits.

There’s no denying the fact that flying over vast expanses of trees, mountains, and water—especially at night—is basically a no-brainer in a twin. Any pilot of a single who isn’t worried when flying over such terrain is delusional or still possesses the mind of a teenager.

Where true twins (those with double the power of their single-engine counterparts) really shine is in takeoff/climb performance and load-carrying ability. Excess power is on tap to haul as many as six people, their luggage, and four hours of fuel off of sea-level runways as short as 2,500 feet. Good luck doing that in any single short of a Pilatus PC–12. Owners of complex singles like to retort, “I never travel with more than three people, anyway.” That’s because they can’t! Nothing like owning a six-seat airplane where two seats never leave the hangar.

Once I haul that big load off the runway in my family’s Beechcraft Baron, I can fly almost as efficiently as today’s complex singles thanks to GAMIjectors and lean-of-peak EGT operation. My twin Continental IO-550s loaf along at about 55-percent power, consuming about 20 gph total doing 170 KTAS—roughly the cruise speed of a Bonanza running at 75-percent power ROP burning 17 gph. Hardly “double” the fuel burn in this case.

The bottom line in aircraft design is that if you want to go fast, you’re going to burn a lot of fuel. Look at the fuel burn of a Cirrus SR22T, Cessna T206, or a Cessna 400 as jaw-dropping examples. And the complex, hard-working engines in those airplanes likely won’t last too long, making engine reserve costs on par with a normally aspirated twin.

Are twins “double trouble”? With two of everything, it must be a hangar queen, right? I remember canceling a trip—once. In 1991, the left engine wouldn’t start. A bad magneto was to blame. So, in 23 years of partnering on this old Baron I had one cancellation and it was attributed to poor preventative magneto maintenance on our part. “Unreliable” definitely does not apply here.

Then there are the creature comforts. Twins have baggage compartments in the nose or in nacelle lockers, so your passengers don’t feel like they’re riding in a third-world airliner. And let’s just face the fact that passengers are reassured when they see two propellers rather than one. Finally, the higher weight and wing loading provide a smoother ride in turbulence.

For the serious IFR pilot, it doesn’t get much better than having a twin: You’ve got the performance on tap for hot, high, and heavy operations; the useful load to carry radar and boots; the power to climb into the upper teens to avoid ice or get on top; and there’s two of everything, especially another engine to carry you to an airport rather than a random corn field—or worse.

Finally, there’s the cool factor. Twins look cool, sound awesome, and convey that you’ve achieved a sort of pinnacle of aircraft ownership and advanced pilot status. They are an absolute hoot to fly with all of that power on tap in your fist. And in today’s depressed market, the money you save buying a twin over a single will allow you to buy thousands of gallons of avgas.

Pete Bedell is a pilot for a major airline and co-owner of a Beechcraft Baron D55.