Get the app Get the app
News & Media A GA&nbsp;&lsquo;hike&rsquo; across America celebrates women in aviation

A GA&nbsp;&lsquo;hike&rsquo; across America celebrates women in aviation 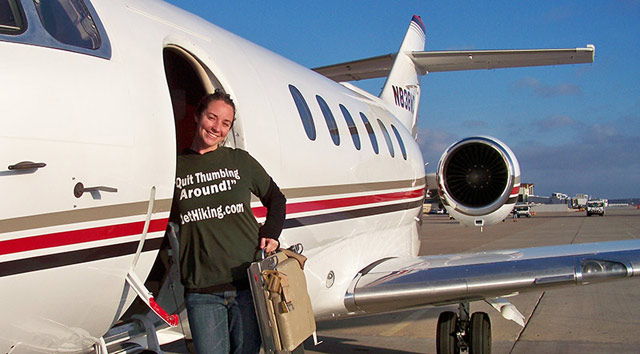 Amber Nolan, aka the “Jethiking Gypsy,” gets a ride in a Hawker, though most of her flights across the country have been piston-powered. Photo courtesy Amber Nolan.

The landing was routine, likewise the reception: With a line crewman looking on, pilot Erin Seidemann, her female front-seat passenger, and a male passenger climbed out of Seidemann’s Cessna 172 SP in Gulf Shores, Ala.

Guess which one the lineman approached for fueling instructions. That question went to the male passenger who emerged from the back seat, who is a friend but not a pilot, and not the aircraft owner, either, though such assumptions are common, Seidemann said. The same thing often happens when Seidemann, 32, takes her father, who is also not a pilot, on flights out of Lakefront Airport in New Orleans, where her Cessna is based.

“We fly together a lot, my father and I,” Seidemann said in a March 5 telephone interview, the eighth anniversary of her purchase of the Skyhawk. “It’s the same thing. Unfortunately, you have to sort of develop a sense of humor about it.”

They make a game of it, father and daughter.

“We place bets,” Seidemann said of FBO staff. “How many people are going to ask him?”

Her father usually sits up front, so the assumptions might be more understandable, said Seidemann, who sports on her car a bumper sticker proclaiming, “A woman’s place is in the cockpit.” She is also a member of The Ninety-Nines and Women of Aviation Worldwide.

Seidemann scheduled as many flights as she could cram into the time available during Women of Aviation Worldwide Week, March 4 through 10. She is among hundreds of pilots banding together to “fly it forward,” giving girls and women an introductory flight that might inspire a passion, or even a career. AOPA is sponsoring (and pilots on staff are flying) a related event March 9 at Frederick Municipal Airport in Frederick, Md., where the association is based.

“The big thing, I think, that’s going to make a difference is just increasing the number of women pilots that we have,” said Seidemann. Fewer than one pilot in 10 is a woman, and Seidemann said that needs to change.

“It is a very small population,” Seidemann said. “In that sense, I understand people’s misconceptions about it. But things are changing.”

Seidemann’s front-seat passenger into Gulf Shores was travel writer Amber Nolan, 28, whose arrival in Alabama extended her own progress nearly halfway to visiting all 50 states as the “ Jethiking Gypsy,” a project she launched last year, nearly on the spur of the moment, encouraged by general aviation pilots.

At first, airplane rides from random strangers were harder to come by, and Nolan scours aircraft owner group and social networking sites online, sometimes stuck in one spot for days or more—even without bad weather. Circling the continental United States, Nolan has found pilots to be very helpful once she has a chance to explain herself. The goal, Nolan said, is to write a book as well as the blog, and, she hopes, a television show to boot, all celebrating the freedom and community she has seen first-hand at and around small airports around the country.

There have been bumps along the way (Nolan was mugged in Detroit during an off-airport adventure), but also moments of beauty that illustrate how flight can feed the soul.
“The one that sticks out in my mind the most was the flight in New Mexico when we were flying and just weaving around the Rio Grande and we had horses chasing us,” Nolan said. “You could see them just chasing the shadow of the plane.”

Nolan has tried her hand at the controls a few times, and caught the bug. “Little by little, I’m doing more and more of it,” she said, recalling a grass strip takeoff and landing in a Citabria. “I was really excited about that.”

Nolan wants to hit a few more states before a planned arrival at Sun ’n Fun, where she hopes to meet more pilots with airplanes and extra seats headed outbound, “where the wind takes me, literally.”