Many choices for ADS-B equipage

While 2020 may seem a long way off, the clock is ticking on the coming NextGen mandate to equip aircraft with Automatic Dependent Surveillance-Broadcast (ADS-B) Out for flight within airspace where Mode C transponders are required today. Avionics industry leaders warn there’s no time like the present, because with about 225,000 aircraft in need of upgrades, and limited capacity in the shops, there may not be enough time to get all aircraft equipped by the deadline.

The multibillion dollar industry still in recovery mode following years of economic malaise can hardly wait for the rush, but for aircraft owners—particularly for owners on a budget—there is a bewildering array of options, considerations, and routes to compliance. At the Aircraft Electronics Association International Trade Show and Convention in Las Vegas, with an exhibit hall packed with bright, flashy displays and eager sales staff, clarity was hard to come by.

Is there still time to wait and see what comes next, what new products may compete for the dollars and drive prices down? Probably not, most of the manufacturers said. More than 100 aircraft will need to be outfitted each day between now and Jan. 1, 2020, to complete the entire transition.

“The biggest concern is really capacity,” said Jessica Power, director of sales and marketing for FreeFlight Systems, among a small group of manufacturers certifying key components for Part 23 aircraft. Power, and others (including AEA President Paula Derks), said aircraft owners who hesitate risk losing out, at least if access to certain controlled airspace is an issue. That view was not entirely unanimous, however.

“Right now, it’s early for ADS-B. There’s going to be a lot more products in the next year, or two years,” said Jared Butson, director of sales for Avidyne. Butson believes that as more products gain certification and supplemental type certificates, and more shops gain experience with the installations and options, there will be more choices, and prices will drop. Avidyne is working on a hybrid active traffic alert system that uses a combination of active interrogation of nearby transponders and ADS-B input from the airspace system. It may hit the market by year’s end.

Avidyne is also among the manufacturers signed on to the “Capstone” protocol, essentially a common architecture for communications within the panel allowing consumers to mix and match various brands of equipment. FreeFlight Systems and Aspen Avionics are also subscribers, though Capstone in and of itself may not have a significant impact on cost to the end user. Prices for key components (an ADS-B transceiver, Wide Area Augmentation System GPS receiver, and transponder) appear to have stabilized, with the total bill for equipping a typical certificated general aviation aircraft starting at $10,000 (about $7,000 if WAAS GPS is already installed), excluding installation and assuming a Mode C transponder is already installed. Flying in Class A airspace will require more expensive options: a Mode S transponder, or an ADS-B transceiver able to broadcast at 1090 MHz. 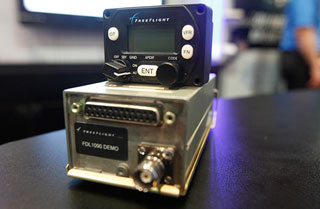 An approved model list supplemental type certificate for the FreeFlight FDL 1090 TX ($6,800, including a WAAS GPS) is expected within about two months.

Garmin has already sold hundreds of the GDL-88, which was approved last year for most GA aircraft, and costs $3,995—roughly half of the cost of Garmin’s previous ADS-B transceiver solution. As far as price goes, that’s about as good as it will get, said Jim Alpiser, Garmin’s director of aviation after-market sales.

“We’re planning on selling thousands of these things,” Alpiser said. Garmin is not currently planning on certifying another new device suitable for piston GA on a budget; Power, likewise, said that given the cost and time required to certify, it is hard to believe anyone will come up with a better—or cheaper—solution in the time remaining.

“The players have already showed their hands,” said Power.

For owners already struggling to keep up with annual inspections, tiedown fees, and the rest, it is possible to opt for the medicine without the in-flight benefits, though savings are slim. FreeFlight’s FDL-1090-TX, announced this year at Heli-Expo and featured again at the AEA convention, offers a combination of the outbound signal required for the flight levels (but suitable for any altitude) and a built-in WAAS for $6,800, excluding installation. That won’t get you the datalink traffic and weather on a cockpit display, however, though a variety of ADS-B In systems offer that function for a few hundred dollars. (Showing that data on a panel-mounted display would be another matter.)

George Pariza, director of product marketing for Aspen Avionics, said a phased approach may make sense for many owners. Aspen has just announced a variety of new products aiming to solve the same basic problems, and Pariza agrees the prices are unlikely to drop significantly as 2020 approaches. Now, he said, is the time to act.

Besides the limited availability of shops and technicians, consider another factor: What’s an airplane that cannot fly in airspace that now requires a transponder going to be worth in 2020?

Then, take two aspirin, and grab your checkbook.