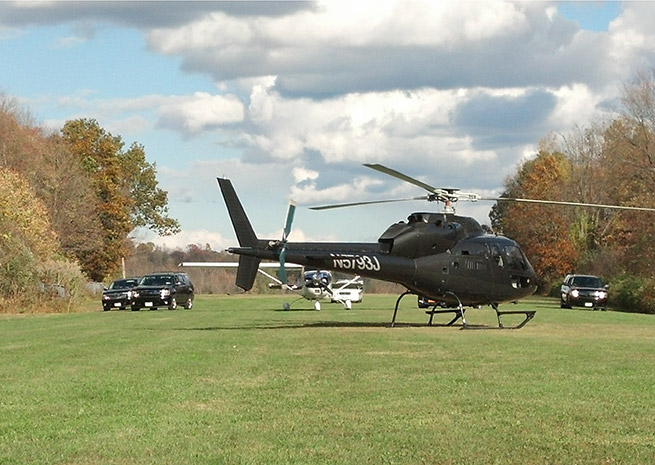 Frank Galella III was accelerating down the runway when a black helicopter swooped in to block his path and force him to stop. Black SUVs and police cruisers hurtled down the grass strip in hot pursuit, surrounding Galella’s Cessna T206. Kevin Bacon drew a gun and pointed it straight at Galella.

Galella is not, however, among the FBI’s most wanted. He’s the president of Lincoln Park Aviation in Lincoln Park, N.J., and the “agents” wearing bulletproof vests were actors. It was Oct. 24, and Warwick Municipal Airport in Warwick, N.Y., was closed for a day of on-location filming.

Galella was both pilot and stunt double for an actor chosen by producers of The Following, a Fox prime time drama about a serial killer who recruits fellow serial killers into a kind of cult, with the FBI in hot pursuit. Galella said the one-day shoot began at 5:30 a.m. and lasted about 14 hours, with a film crew of about 100 setting up the single scene and running it many times. Galella said it was a memorable day, one that will stand out in a logbook with more than 4,200 hours over the past quarter-century.

Galella has taken on film and television jobs before, flying a taildragger to help producers update a scene in the 1982 film The World According To Garp about a decade ago. That job, like Galella’s more recent brush with Hollywood, came about by happenstance. Galella said he does not seek Hollywood gigs, though he’s willing to help when asked.

“I don’t do this for a living,” said Galella, who made a point to extoll the virtues of the six-seat Cessna he flew, a “wonderful airplane.”

It was David MacMillan, the airport manager, who got the ball rolling. Location scouts called looking for an airfield with a grass strip and cooperative owners, and MacMillan was only too happy to help, offering not one but two grass runways to choose from (there’s also a paved runway), and a picturesque setting next to a lake, nestled among hills. A location scout arrived in time to see the sunset.

“The poor guy saw the mist coming off the lake and he melted,” MacMillan recalled in a telephone interview. “We have a little jewel of an airport. My words don’t do it justice.” 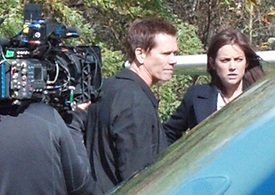 MacMillan said the production appeared chaotic, at first, though the crew of about 100 got organized quickly. “People get their routines set up,” and “everything starts to flow.” The entire field was transformed into a television set, with breakfast and lunch served in a hangar. Over and over, there were safety briefings, painstaking planning, and the scene was played out for the cameras. The production team had collected photos and detailed clothing measurements from Galella, finding an actor with a similar build to portray the on-screen pilot Galella was doubling for. As the FBI agents surround the Cessna, the script called for Bacon (playing “Ryan Hardy,” one of the central characters in the show) to open the door and point a .44 pistol at Galella’s head. Galella said all of the guns were real, though unloaded, and the production team kept careful track of where they were at all times, which Galella called a “comforting touch of organization” in an email following a telephone interview. 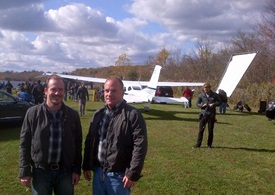 “After 25 years of flying and 4,200 hours later there are not many days that remain memorable, but this was one of them,” Galella wrote. “For me flying is usually work!”

Neither Galella nor MacMillan were particularly impressed with the stars, lights, or cameras on the set. They were only vaguely aware of the show’s storyline, though both reported the new season will begin in January. MacMillan has worked with actors before, meeting Bob Newhart when producers of the 1997 film In & Out chose the airport for location shooting. MacMillan said Newhart was a “wry comic,” and he enjoyed meeting the comedian and start of film and television, though he is generally not one to be star struck.

“I steer away from celebrities,” MacMillan said.

Galella, a longtime friend of MacMillan’s, was not tempted by an autograph opportunity, either. “I think I’m kind of in the same mold.” 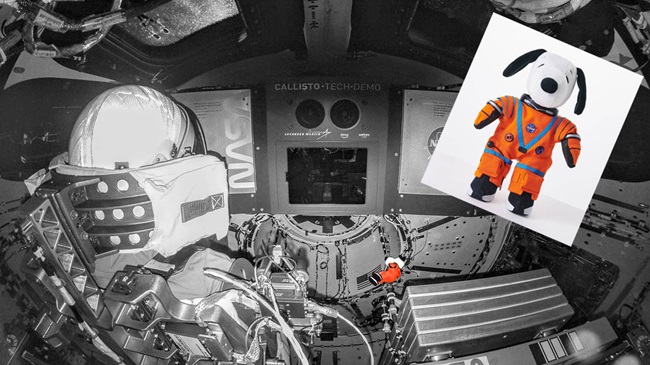 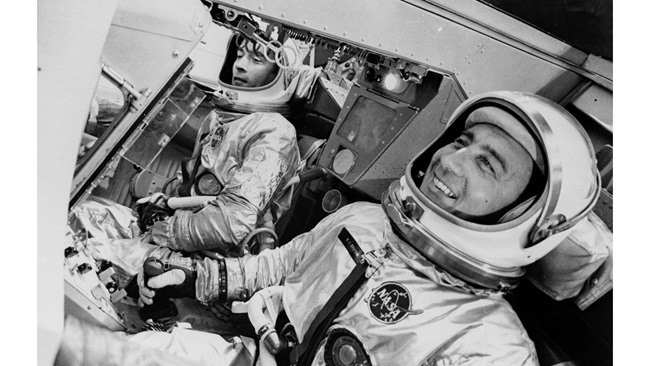