Get the app Get the app
Get the latest news on coronavirus impacts on general aviation, including what AOPA is doing to protect GA, event cancellations, advice for pilots to protect themselves, and more. Read More
Already a member? Please login below for an enhanced experience. Not a member? Join today
News & Media Basics of the Robinson R22

If you learn to fly helicopters today, the odds are heavily in favor of finding a Robinson R22 on the ramp. With close to 5,000 of the light helicopters coming out of the Torrance, Calif., factory, no other helicopter comes close in sheer numbers.

I’m continually amazed with the R22. Look at any airplane and unless it was designed by Burt Rutan, there are obvious nods to its ability to fly. The Wright brothers studied birds, even going so far as to use a similar wing-warping mechanism to control their machines. By contrast, look at an R22, or any helicopter for that matter, and nothing says flight. Helicopters shouldn’t fly. The physics challenges that must be overcome are immense. Robinson, like most helicopter manufacturers, has developed a number of simple, quite elegant solutions to these problems.

Other than gravity, torque is a helicopter manufacturer’s most tricky force. A few massive spinning rotor blades provide a lot of force in the opposite direction of travel. The solution is a tail rotor, that small disc that spins on the tail of most helicopters. Like the main rotor, the tail rotor is a wing with the same features any airplane pilot would recognize. To keep it short Robinson made it a positively cambered airfoil. The amount of thrust the tail rotor produces is directly proportional to its angle of attack, just like an airplane. That is changed through the anti-torque pedals, which are not surprisingly in the same position as an airplane’s rudder pedals. (Starting the engine without holding the brakes is an odd feeling, though.)

That tail rotor obviously produces a lot of thrust, which means it’s continually trying to push the tail. If not corrected the helicopter would just constantly drift downwind, or right, in the case of the R22. The pilot could counteract that with a left cyclic input (think left turn), but that would get annoying after a few minutes. So Robinson cheated and mounted the main rotor two degrees to the left. Problem solved. 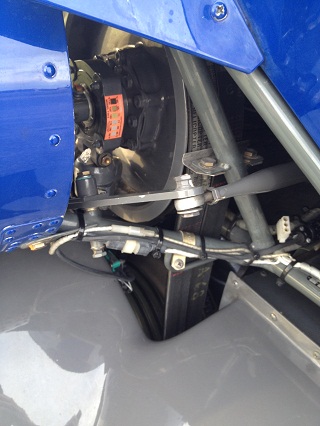 The rotor blades also cause another common effect that airplane pilots are familiar with—gyroscopic precession. But instead of a small propeller, helicopter pilots have massive spinning discs on top of the aircraft to contend with. This causes many unique problems, but the most interesting is the rather vanilla level turn. You’ll recall that gyroscopic precession says that a force applied to the spinning disc will result in an action 90 degrees later. Now imagine that rotor disc tilting left for a left turn. Instead of turning left, the helicopter would go back. To fix this rather annoying trait, helicopter manufacturers simply rigged the control system so that pilot inputs are applied 90 degrees early. So, turn the controls left and the force is applied forward.

Those blades are clearly a little heavy as well. You can imagine the strain that would put on the engine on startup if they were connected directly to the crankshaft the way most propellers are. Instead, Robinson uses a simple, light, and cheap belt system as a clutch. Here’s how it works: The pilot starts the engine and a wheel that’s directly attached to the crankshaft called the lower sheave begins to spin. Riding on that wheel are two belts in parallel. The belts travel up in the system to another wheel called the upper sheave. Soon after starting the engine the pilot engages the clutch. At this point a small motor moves the upper sheave and the belts tighten. That tension spins the main rotor and tail rotor driveshafts, which are indirectly connected through transmissions to the rotors themselves.

There are loads of other cheap and creative ideas on display in the helicopter. The transmission and other parts are critical. Excessive heat can lead to failures. Instead of a complex gauge, a simple temperature tape is stuck to the outside of important components. Yaw is monitored with spring on the canopy bubble. A mechanical linkage helps to maintain critical throttle control.

Despite the massive sales figures Robinson has amassed, the R22 is not without its critics. A spate of accidents resulted in a special federal aviation regulation that requires most students to get 20 hours in the helicopter before being allowed to solo. Because it’s so light, the R22 main rotor loses inertia quickly, which can be a potentially fatal problem after an engine failure in a helicopter. There’s also an electronic governor and that mechanical corellator that some people say makes it too easy to control when you’re first learning. The belt drive system, which is common in applications such as motorcycles, can fail if not properly maintained and managed by the pilot. And of course it’s light, so load capacity is pretty much nonexistent.

But I’m still in the honeymoon phase where even walking up to the helicopter gets me excited. The critics might be right, or they might be jaded, but it’s so much fun I don’t care either way.