Get the app Get the app
AOPA will be closed July 4th, in observance of the Independence Day holiday. We will reopen at 8:30 am ET on Tuesday, July 5.
News & Media Embraer announces upgrades, design changes 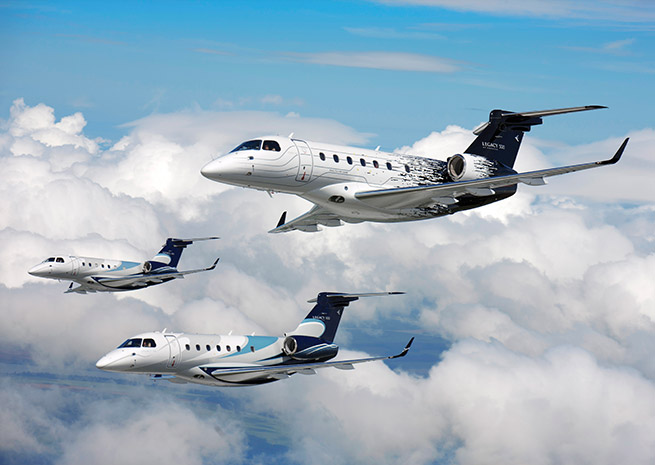 Embraer on Oct. 21 revealed several big changes now in the works for its line of executive jets.

Phenom 100: In a much-anticipated move, Embraer said it would fit all upcoming newly delivered Phenom 100s—dubbed the “2014 Edition”—with multifunction spoilers as standard equipment. The spoilers serve as speed brakes as well as ground spoilers. For in-flight deployment, limitations for speed brake use include a minimum airspeed of 180 knots and flaps retracted. A two-position on-off switch actuates the speed brakes, which will greatly aid pilots of the slippery Phenom in reducing speed and increasing descent rates while maneuvering in the approach phase.

Upon landing and with weight on wheels, the ground spoiler function is automatically actuated. While this both dumps lift and increases drag for shorter landing distances, there is no official performance credit. While the spoilers are standard, they will be made available as retrofit items for earlier airplanes under terms of a future service bulletin.

Other improvements for the airplane involve 11 new interior theme collections (up from the previous six choices), with color schemes ranging from “Amber” to “Tiffany.” The seats get a complete makeover as well. Optional premium seats—the same as those in the Phenom 300—recline and swivel. Also available is a refreshment center that replaces the forward wardrobe compartment, as well as an aft storage compartment atop the lavatory’s existing cabinet. This, Embraer says, is a popular choice among those opting for the side-facing forward seat arrangement.

The big news for the Legacy 450 program is a fuselage stretch of six inches, made possible by a two-inch lengthening in the forward cabin area, and a four-inch stretch aft of the club seats. This gives the occupants of the two aftmost seats four more inches of leg room, Embraer said, stressing that the lengthening was the product of a redesign, not the addition of fuselage plugs. Now the airplane has, at 24 feet, the longest cabin of its nearest competitors—the Cessna Citation XLS+, the Lear 75, and the Lear 60XR. The six-foot-high, flat-floored cabin benefits from a collaboration with the BMW design group, and now features such creature comforts as side ledges with storage compartments, newly designed divan armrests, and magazine holders.

Equally significant is an increase in the Legacy 450’s four passenger max range at long-range cruise power settings. Now that range is posted as 2,500 nm—up from the previously advertised 2,300 nm. This, thanks to a boost in max takeoff and zero fuel weight.

Both the 450 and 500 can augment their Rockwell Collins Pro Line Fusion avionics with Embraer’s Enhanced Vision System (E2VS). This incorporates Rockwell Collins’ HGS-3500 head-up display with both synthetic and enhanced vision displays, including that company’s EVS-3000 enhanced vision system. The latter is able to detect all types of runway lighting, including LED lights. The 500 also features an autobrake system.

Legacy 600, 650: Embraer announced the full certification of Honeywell’s Primus Elite avionics upgrade for these airplanes, which  bring WAAS/LPV and RNP 0.3 capability with them. Existing customers can upgrade their Primus 1000 suites via a service bulletin. The 3,400-nm (Legacy 600) and 3,900-nm (Legacy 650) airplanes’ Ovation Select cabins now allow wireless control of the cabin management system, including Blu-ray players, Apple TV features, lighting, and much more, via Apple’s iPads or iPhones—and yes, there’s an app for that.

Lineage 1000E: Embraer’s ultra-large, five-zone, long-range top-of-the line jet gets its new “E” name suffix thanks to 200 more nautical miles of range with eight passengers—to 4,600 nm, up from 4,400 nm. This boost comes from a 500-pound basic empty weight decrease. The Lineage 1000 line, based on Embraer’s E190 airliner design, had a second front door and extra cabin windows. These were removed because neither was used in the Lineage 1000 application, so eliminating them brought the weight reduction.

AOPA Pilot Editor at Large
AOPA Pilot Editor at Large Tom Horne has worked at AOPA since the early 1980s. He began flying in 1975 and has an airline transport pilot and flight instructor certificates. He’s flown everything from ultralights to Gulfstreams and ferried numerous piston airplanes across the Atlantic.
Go to Thomas A. Horne's Profile
Topics: Aviation Industry, Technology, Movies and Television