Get the app Get the app
Already a member? Please login below for an enhanced experience. Not a member? Join today
We will be performing maintenance on our systems Sunday, 5/22/2021, beginning at 12:00 A.M. ET and ending at 6:00 A.M. ET. During this time, you may experience intermittent service outages. We appreciate your patience.
News & Media Crop dusters go to war 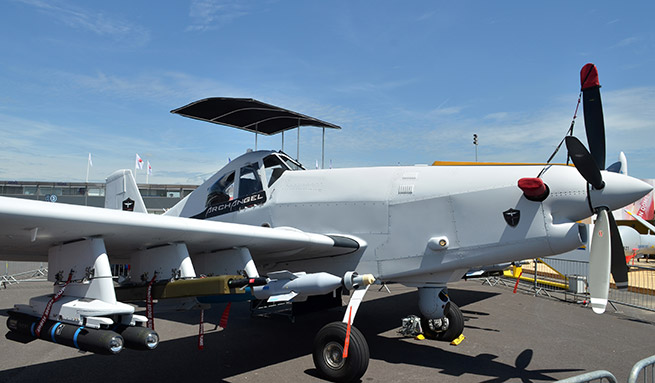 While the producers of Disney’s animated feature Planes were giving the crop duster a makeover as a likeable underdog who wins a race with help from war machines, engineers in the real world were hard at work making crop dusters into actual war machines.

The Archangel, displayed publicly for the first time at the 2013 Paris Air Show, is not made for dogfighting with other aircraft. It is fitted with precision optics and laser targeting systems with border patrol and surveillance in mind, able to loiter for hours at altitudes up to 22,000 feet, and hit targets on the ground with precision munitions. In a sense, it is made to dogfight unmanned systems—in the marketplace.

The Archangel is by no means the first foray by the general aviation industry onto the battlefield. Various GA manufacturers have adapted their designs for military or intelligence missions over the years, and it remains a present focus of several. Beechcraft Corp. markets the AT-6 for light attack missions, and the King Air for intelligence, surveillance, and reconnaissance (ISR); Brazil’s Embraer bested Beechcraft for a disputed Air Force contract to equip Afghanistan with Super Tucano attack aircraft; Bombardier expects sales of business and regional airline jets modified for ISR and related missions like search and rescue to eventually account for 20 percent of aircraft revenue, according to Bloomberg Businessweek.

Richard Aboulafia, an aviation analyst with the Teal Group, said there is little room in the marketplace for GA manufacturers to expand what’s already been done along military lines.

“I think it’s thoroughly tapped,” Aboulafia said of worldwide military and government demand. “Those markets are quite mature.”

The recent introduction of agricultural aircraft to the border patrol market could be viewed as a small-scale skirmish between man and machine, John Henry versus the steam drill. The Archangel now being militarized by North Carolina-based IOMAX  is positioned to compete with unmanned alternatives for those who want to bomb on a budget.

“It does a mission very similar to what you get with a Reaper unmanned aircraft,” said IOMAX Chief Technical Officer Jim Toole in a telephone interview, noting that the Thrush offers “greater payload and a man in the loop.”

Aboulafia does not expect armed crop dusters will push Reapers and their cousins out of many arsenals.

The Archangel is outfitted for armed patrol by a crew of two, with a pilot in front and a mission specialist in back to handle surveillance monitoring and weapons targeting. After accepting a stock Thrush from the factory (minus the sprayers and avionics) IOMAX sets to work adding an electro-optic/infrared (EO/IR) turret with laser range-finding and target designation capability, along with hard points for the same AGM-114 Hellfire missiles used extensively in the CIA campaign of Predator strikes in Afghanistan and Pakistan.

The same hard points can be fitted with precision-guided bombs up to 500 pounds each, or rocket pods. Weapons and surveillance systems can be customized based on the customer’s needs, and the total package can cost less than what the U.S. Air Force is paying for the MQ-9 Reaper: $16.9 million in fiscal 2013, slated to increase $22.6 million in 2017, according to federal budget documents. IOMAX can turn a Thrush 710 into an Archangel in about 45 days, and packages the aircraft with flight crew training, maintenance training and support, and related services. Prices vary depending on configuration, but the company said the goal is to ship the Archangel at $10 million per airframe, or less—perhaps significantly less.

IOMAX officials said the company has two customers prepared to buy the Archangel.

IOMAX started arming crop dusters in 2009, purchasing 24 Air Tractor AT-802 models for arming and sale to the United Arab Emirates. IOMAX has since shifted to dealing with Thrush Aircraft, which produces very similar aircraft with a common design lineage. Toole said the combination of a large wing, high-powered engine, large payload capability, and the ability to remain on station for hours make the crop dusters uniquely qualified among GA aircraft for armed surveillance.

“There’s nothing else out there that would perform the ISR mission and carry 5,000 pounds of external stores,” Toole said. “Clearly, a (Cessna) Caravan won’t do that.”

Thrush Aircraft Vice President Erik Rojek said the agricultural side of the business continues to boom, with a fourth year of record sales expected, driven by a worldwide increase in demand for agricultural models. Rojek said the company hopes demand for the Archangel will eventually support a dedicated production line producing 12 or more aircraft per year.

Even if armed crop dusters never outpace their agricultural cousins, Rojek said working with IOMAX to adapt the 710 for armed patrol has been a “fun time.” (If you’re wondering, the weapons testing is generally done overseas, in whichever country orders the aircraft, according to Toole.)

“On the cool factor it’s pretty damn high up there,” Rojek said of the militarized crop duster.