Get the app Get the app
Already a member? Please login below for an enhanced experience. Not a member? Join today
News & Media Pilots talk safety after fatal Connecticut accident 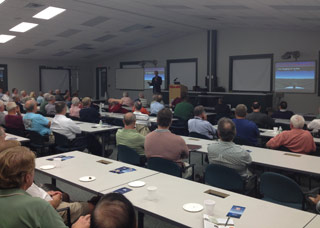 Landsberg, speaking to about 90 pilots and AOPA members who attended the  “Safe Skies, Good Neighbors” seminar Sept. 10, covered a variety of emergency procedures and best pilot practices for operations at airports adjacent to residential neighborhoods.

The Air Safety Institute designed the seminar after an Aug. 9 accident in which a Rockwell 690B Turbo Commander attempted a circle-to-land instrument approach at Tweed-New Haven and struck a home, killing two children in the home as well as the pilot and his teenage son. The National Transportation Safety Board is investigating the accident.

Landsberg, addressing what he called, “the elephant in the room,” discussed what is known so far about the accident at Tweed-New Haven, which is about 20 miles from Chester.

Landsberg explained the difficulty pilots sometimes have keeping the airport in site while flying at circle-to-land approach at minimums, and how checking the airport’s position should be made an integral part of the instrument scan during such approaches.

“There’s nothing simple about a circle-to-land approach,” Landsberg told the pilots, a number of who fly out of Tweed-New Haven.  “In fact, in many ways it can be one of the most difficult approaches, and we don’t practice them enough.”

The seminar was held in a conference room provided by Whelen Engineering, the maker of aviation and emergency vehicle lighting products. Whelen has a manufacturing facility next to the Chester Airport.

In addition, he discussed emergency procedures near crowded airports, the best way to select off-airport landing sites, glide ratios, and the “Impossible Turn,” or the perils of turning back to the airport after encountering engine problems during take-off.

Only after gaining enough altitude and airspeed, he counseled, are turn-backs possible.

Landsberg also discussed public policy of development near airports, displaying a picture of Tweed-New Haven when it as founded in 1931—with no buildings nearby—and as it stands today, with dense residential development surrounding it.

By contrast, he noted that the airport authority of Birmingham, Ala., has spent the last several years buying and clearing homes in the approach path of that airport’s Runway 18, the scene of an Aug. 14 crash of a UPS Airbus 300. Both crew members died.

“Can you imagine the losses if the city had not bought up that property and moved those houses out?” Landsberg asked the audience. “Maybe it makes some sense to make sure these approach areas are clear.”

Pilots who attended the safety seminar were eligible for credit in the FAA’s Wings program.