Get the app Get the app
Already a member? Please login below for an enhanced experience. Not a member? Join today
We will be performing maintenance on our systems Sunday, 5/22/2021, beginning at 12:00 A.M. ET and ending at 6:00 A.M. ET. During this time, you may experience intermittent service outages. We appreciate your patience.
News & Media 'We added a second shift': Jobs flow from Indiana tax bill 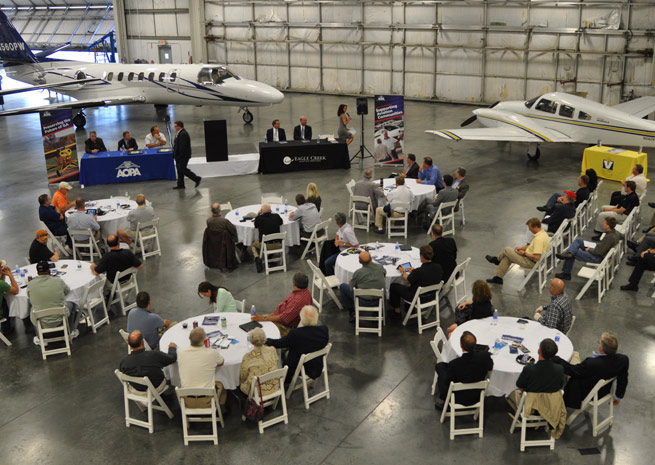 AOPA and top Indiana Senate and House leaders gathered inside the expansive hangar of Eagle Creek Aviation Services in Indianapolis Sept. 13 to mark the nearly instant success of a tax reduction for general aviation businesses. An Indiana measure signed into law just several months ago is already creating dozens of new jobs and increased revenue for general aviation businesses.

“We added a second shift,” said Matt Hagans, CEO of Eagle Creek Aviation Services, which is located at Eagle Creek Airpark on the west side of Indianapolis. “If this bill didn’t get passed, we were looking at shipping people down to our Florida operation. These jobs would have left the state.”

Instead, Eagle Creek has seen a stream of new orders for the turboprop airplane it refurbishes and sells. At a nearby Hawker Beechcraft Services facility, located at the Indianapolis International Airport, hiring is up 75 percent and more new jobs are expected in 2014, said Marty Becker, who leads the facility's operation.

“I’m proud to say that at Hawker Beechcraft Services Indy, we’ve been able to add people to our staff due in part to this law,” Becker told the audience of about 100 AOPA members and pilots and a number of aviation students from nearby Vincennes University. He said the Indianapolis facility previously lost business because of the tax on repairs. “Now that is over, and we are pleased that our customers are no longer affected by this repair tax!”

The Indiana legislature passed a key tax relief measure in the 2013 legislative session on general aviation operations as part of a state budget bill. The bill eliminated a gas tax, which can save aircraft owners about 40 cents per gallon, as well as a 7 percent tax on aircraft parts and labor. The taxes were stifling Indiana’s aviation businesses, as aircraft owners bypassed the state to avoid hefty fuel and repair taxes.

“People would go to a different state,” said Brian Bosma, the Speaker of the Indiana House of Representatives. “Ohio, New York, Maine, Oklahoma, Florida have already done this. If we don’t give some relief we are simply not competitive.”

Bosma and Senate Leader Brandt Hershman—both key sponsors of the tax-relief bill—were awarded AOPA Presidential citations at the event for their work in support of GA.

“We would like to recognize the foresight these two leaders have demonstrated on behalf of general aviation and AOPA members," said Melissa Rudinger, AOPA senior vice president for government affairs. She presented the awards with AOPA Great Lakes Regional Manager Bryan Budds and Mark Kimberling, AOPA director of state government affairs.

“I can’t say enough about the work that Senator Hershman and Speaker Bosma have done on behalf of general aviation in Indiana,” said AOPA President and CEO Mark Baker. “This new legislation is bringing new business and jobs to Indiana by making it more affordable for pilots and aircraft owners to operate in the state. Those sorts of immediate results aren’t always easy to achieve in our current economy, but these two lawmakers helped made it happen for the Indiana communities with airports.”

AOPA is working to win similar measures in other states with high taxes on aviation fuel and services. Indiana’s experience of attracting new jobs and business after the tax was lifted has already occurred in other states, such as Maine, where aviation job growth is up 150 percent since 2011. Legislators in other Midwestern states, including Michigan and Wisconsin, have expressed interest in the Indiana bill and have been encouraged by what they have seen.

“When we explained House bill 1545 to our members,” Bosma said, “almost no one thought it was a bad idea.”

Money and good-paying jobs generated in community GA businesses tend to stay in those communities, strengthening both local ties and Indiana’s reputation as a “crossroads,” according to Hershman.

“There are people all over the United States who are jealous of our legislation,” said Martin Ingram, who operates Muncie Aviation Co., which has 58 full time employees. “Because of this bill, all of those people will be able to keep their jobs.”