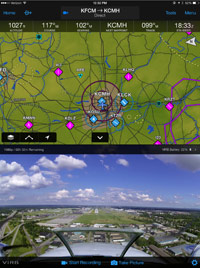 While aviation is just a small market for the Garmin VIRB, the company that got its start in aviation recognized from when the VIRB was introduced last fall that it needed to address the unique needs of those flying aircraft—especially propeller driven aircraft. On April 1 at Sun 'n Fun, Garmin debuted the VIRB Elite Aviation Bundle, which includes the popular HD point-of-view camera, a headset audio cable for capturing intercom and air traffic control conversations, and a removable filter that helps to reduce the propeller blur common on such cameras.

The kit also includes a 16GB high-speed microSD card for capturing video, a suction cup for mounting in the cockpit, and six-months free of the Garmin Pilot electronic flight bag. The EFB can display images from the VIRB. The kit sells for $549.

Those who want the full monty aviation shooting experience will want to go for the Aviation Action Pack, which throws in the D2 watch. In addition to telling time and impressing your friends with its multitude of functions, the D2 can control the VIRB remotely. So mount the camera somewhere and use the watch to turn it off and on and control other functions. The Aviation Action Pack includes everything in the Aviation Bundle, plus the D2 and sells for $899.

The prop filter and audio cable can be purchased separately for $49.99 each.

Contributor (former Editor in Chief)
Contributor and former AOPA Editor in Chief Tom Haines joined AOPA in 1988. He owns and flies a Beechcraft A36 Bonanza. Since soloing at 16 and earning a private pilot certificate at 17, he has flown more than 100 models of general aviation airplanes.
Go to Thomas B Haines's Profile
Topics: Sun 'n Fun, Gear, Events