Get the app Get the app
AOPA will be closing at 1:45pm ET on Tuesday, December 6th. We will reopen Wednesday morning at 8:30am ET.
AOPA Members DO more LEARN more SAVE more - Get MORE out of being a pilot - CLICK HERE
News & Media Be a member of the club

Be a member of the club

AOPA sees the formation and promotion of flying clubs as a key initiative to bring more people into the flying community. The association hosted a breakfast April 3 at Sun 'n Fun in Lakeland, Fla., to help spread the gospel.

“Flying clubs are how we can grow the flying community,” said AOPA President Mark Baker in his opening remarks. He introduced AOPA Vice President of Flight Operations Woody Cahall, who conducted a panel presentation to more than 75 assembled AOPA members enjoying a free breakfast.

On the panel were Cahall, Marc Epner of the Leading Edge Flying Club in Chicago, and Jan Squillace of the Wings of Carolina Flying Club in Sanford, N.C.

“Flying clubs can be the social glue that will hold GA together,” said Cahall. He noted that AOPA has prepared a Guide to Starting a Flying Club, and interested attendees received a free thumb drive with the starter kit. 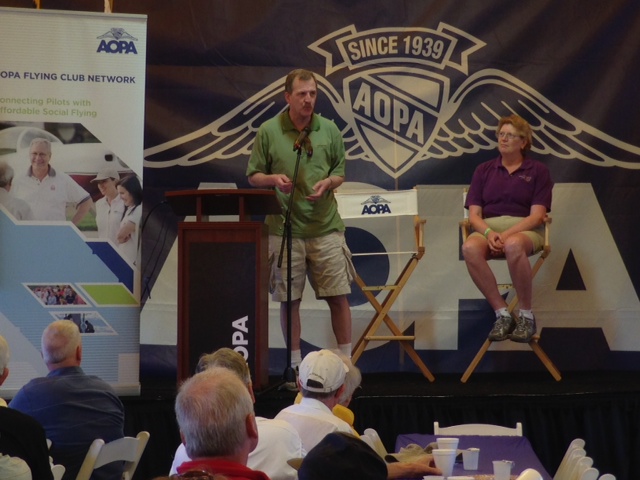 Epner and Squillace described their flying clubs, both highlighting the friendship and camaraderie of a flying club network. “They’re all our friends,” Squillace said. “We’ll fix lunch for anyone who shows up.”

The panel fielded questions from the audience, which ranged from concerns about insurance and liability to questions about costs and community activities.

Epner said he calls it “Common Unity” and emphasized that a key component to organizing a flying club is making it “easy in and easy out.”