Get the app Get the app
AOPA Members DO more LEARN more SAVE more - Get MORE out of being a pilot - CLICK HERE
News & Media Rep. Graves gives House GA Caucus update at Sun ‘n Fun

Rep. Sam Graves (R-Mo.), co-chair of the House General Aviation Caucus, used remarks at a pilot town hall meeting at Sun ‘n Fun to cover topics including the growth of the caucus, the upcoming FAA reauthorization, a bill that would allow more pilots to fly without a third class medical, and how general aviation advocates can help push favorable GA policies in Congress.

The House GA Caucus is six years old, and has 239 members, said Graves. “That is more than half the members [of Congress], and it has become the largest caucus in the House,” he said. “We use the caucus to spread the word to those who may not understand GA issues. It also helps us get information out more quickly.” 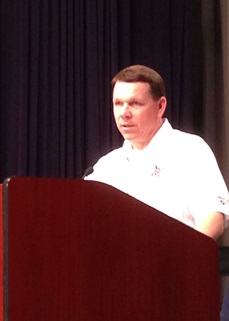 Thanks to the GA Caucus, the House was able to pass the Small Aircraft Revitalization Act, kill user fees again, and introduce the sleep apnea and third class medical bills, said Graves. “And we’ve just formed the House Pilots Caucus, which has 17 members. They are made up of current and nonflying pilots,” he said.

Next up is the FAA reauthorization bill, which expires in February 2015, said Graves. “We had 23 extensions the last time. So [Transportation Committee Chairman] Bill Shuster is already working on issues with the bill now,” he said. “He has created listening posts on the Hill, talking with groups on what they need in terms of the next reauthorization. We have a lot of work to do, but hopefully we will have a good bill, and it will be on time.”

Graves said he realized how powerful the GA Caucus has become because Shuster asked him to be on his listening post panel. “The word has spread about the caucus because members know we can push very hard and get things done quickly. User fees are a great example of that,” he said.

Graves was asked what individuals could to help move GA issues along. “The best thing you can do is contact your representatives and senators, which isn’t tough to do,” he said. “If your airport is having a fly-in, an airshow, or airport days, invite the member with their family and kids. Give them the opportunity to sit in a plane.”

General aviation members have aircraft like warbirds that people want to see and touch, so use it as an advantage, said Graves. “Some of us fly with people who are running for office. Establish and grow those relationships, and make sure they're members of the GA Caucus,” he advised. “With members of Congress, it's all about relationships. You can have all the lobbyists in the world, but people from the home district get the meeting every time, so build that relationship.”

Rep. John Barrow (D-Ga.) is a perfect example of this, said Graves. “He’s not a pilot, but he has Gulfstream Aerospace in his district. He knows how important general aviation is in his community because of the jobs and economic development it brings in,” he said.

If the representative isn’t available, said Graves, ask for the person who handles transportation issues and build that relationship. “And if you have trouble, just call me. I’ll give them a call and walk them through things,” he said. “Some people don’t understand aviation, so I can help. Sometimes you feel embarrassed about asking a question and seeming uninformed.”
Encourage airports to have open houses and invite the community and the city council, said Graves.  “Have more fly-ins, pancake breakfasts, and airshows,” he said. “The more we can get more people involved, the more we’ll be able to protect our future.”