Around the world on zero fuel 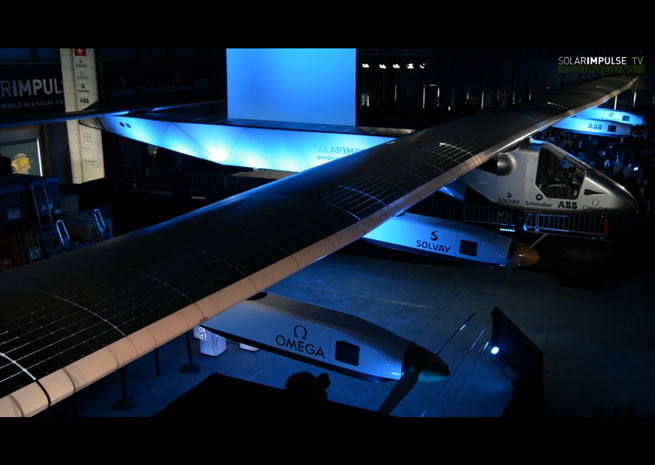 The new aircraft’s empty weight is just a shade over 5,000 pounds, painstakingly reduced gram by gram to its finished form. The takeoff weight will be just a little higher: add the pilot, food and drink for up to five days, and that's about it—there’s no fuel on board.

Solar Impulse 2, successor to Solar Impulse, the solar-powered aircraft that traversed the United States in 2013, was unveiled to the world April 9 with fanfare and flair in an event broadcast live online from Switzerland, where the revolutionary aircraft—the brainchild of pilots André Borschberg and Bertrand Piccard—was built.

The new version is larger, more sophisticated, and capable (the pilots and engineers hope) of circumnavigating the globe in 2015, a mission that will include nonstop ocean crossings lasting five days or more that will test both the mettle of the men in the cockpit, and the carbon fiber skeleton and skin of the aircraft. Solar Impulse 2 is the product of a 12-year design effort, including many updates and refinements to the original Solar Impulse, which served as a prototype and test bed for the cutting-edge technologies required to drive an aircraft around the world powered exclusively by the sun.

Borschberg, the Solar Impulse CEO and a former fighter pilot, said the improvements were needed to make circumnavigation a practical possibility.

“We didn’t want to spend too much time taking swimming lessons, so we really had to work on the reliability of the airplane,” Borschberg said during the unveiling. 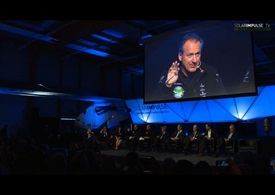 More than 80 engineers (and many more sponsors and companies) have collaborated to increase the performance of Solar Impulse 2, making it more robust and able to handle the weather that the pilots are likely to encounter. Their design objectives were in conflict, Borschberg noted: increasing performance, strength, and reliability required increased weight, while increased weight would decrease performance. A number of technological innovations were achieved, including development of a carbon fiber skin that weighs 25 grams per square meter, about one-third the weight of typical office paper. A sophisticated autopilot system was developed, a “virtual copilot” able to wake a sleeping pilot if a situation develops that requires human intervention, particularly useful during ocean crossings that will last 120 hours or more.

“We had to find people who did not know it was impossible,” Piccard said, reflecting on an effort that began in 2003. “Solar impulse is one example of what we can do when we believe we can achieve the impossible.”

The new and final version of Solar Impulse will still operate within tight limitations: a maximum bank angle of 5 degrees, a takeoff speed of 26 knots, and a maximum cruise altitude of 27,000 feet. Its top speed at that altitude is 77 knots, by day—at night the aircraft will be forced to slow down to 25 knots to avoid depleting its sophisticated batteries before sunrise. At the lower end of its speed range, it is likely the aircraft will spend a significant amount of time flying backward, as the first Solar Impulse did on a flight from Morocco to Spain. The engineering and support team had planned for that, and assured Piccard that he would reach his destination eventually. 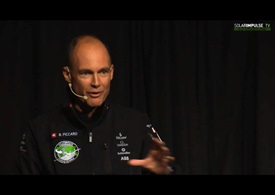 “I was a little skeptical in the beginning, but it worked,” Piccard said.

The new aircraft’s cabin is larger, affording room for a more comfortable seat, and, Piccard noted with a wry smile, more room for shark repellent and a life raft. Neither promised their five-month circumnavigation planned to launch in March 2015, will be successful.

“It’s an attempt,” said Piccard, who was in 1999 the first to circumnavigate nonstop in a balloon. “It’s difficult.”

Borschberg said the new aircraft’s first flight is planned in May. Both pilots have spent time in simulations, getting used to the confinement and isolation of spending days on end in a cockpit with little room to spare. The pilots employ techniques including self-hypnosis and meditation to retain their focus and extend their endurance.

“It’s not the easiest way to fly around the world, but it’s probably the most spectacular way we can achieve today,” Piccard said. 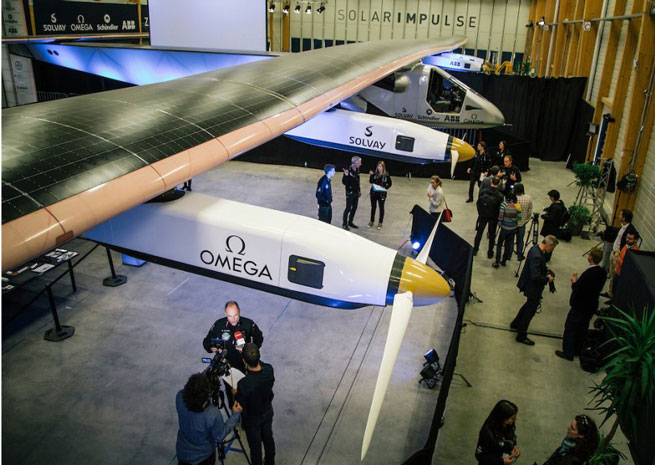