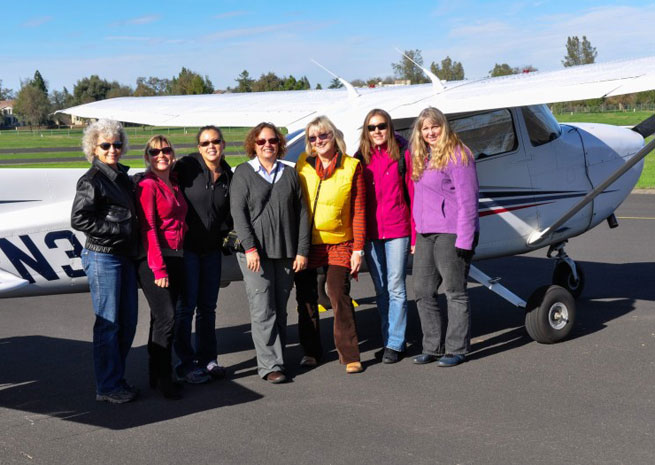 The creation of the Women of West Valley in March 2012 as a new group under California's Palo Alto West Valley Flying Club started as a way for female members to get to know each other.

“It is a fun opportunity for all the female pilots or women aviation enthusiasts to get together and have some fun,” said Sue Ballew, the group’s fly-out organizer. We host monthly meetings as well as fly-outs and other fun events.”

The original idea for Women of West Valley came from Ashley Porath, assistant to the club’s general manager, and Noelle Flaker, who is on the member services team, said Ballew. “They sent out an email to all of the women members of West Valley Flying Club inviting them to meet and get to know each other,” she said. “I think from a management standpoint, they saw a need to get more women involved in aviation and regular flying.”

Women of West Valley membership is covered under the West Valley Flying Club’s regular membership, said Ballew. “We started out having monthly meetings for women pilots, but did not get much of a turnout. So we decided to organize fly-outs,” she said. “Our first fly-out to Hollister, Calif., for lunch in May 2012 drew about eight women.”

The number of those who participate varies from month to month, said Ballew. “We just want to call attention to women pilots and encourage them with an actual event centered around women so they know they are not alone out there,” she said.

The fly-outs are open to everyone and Women of West Valley teams up with the Santa Clara Valley chapter of The Ninety-Nines and the Santa Clara Airmen’s Association so everyone can fly together, said Ballew. “We typically have a mix of 15 to 40 people show up from all of the groups. I usually conduct a lesson with one of my students flying the outbound leg and the other flying the return leg,” she said. “This gives them the opportunity to observe another pilot during a lesson, meet lots of other pilots, and see what flying is all about once you get your license, and also go to some great destinations that they would not normally go to during training.”

Ballew said she hopes the effort will create camaraderie with student pilots and within the pilot community, and keep everyone flying and flying more often.