Rusty pilot shares story of return to the skies

Mark Luetkemeyer of Plano, Texas, could be the poster child of the new AOPA Rusty Pilots initiative. After seeing an AOPA Online article about the effort to get pilots back into the cockpit, he sent an email to share the story about how he began flying again after a 25-year hiatus.

Luetkemeyer, an AOPA member, traced his desire to fly back to his early teens. “My dad used to take us to the Jefferson City [Memorial] airport" in Missouri, "and he learned to fly there in the mid-1960s,” he said. “I got my certificate when I was 24 while in the Navy, where I was an intelligence officer.”

While in the military, Luetkemeyer also earned instrument and multiengine ratings, a commercial pilot certificate, and initial and instrument flight instructor certificates. He had accumulated almost 1,500 flight hours when he stopped flying.

Luetkemeyer said his decision stop flying was simple: money. “When I was in the military, I flew with military flying clubs, which were very reasonable,” he said. “When I became a civilian in the early 1980s, there wasn’t a good military flying club nearby, and other things took up my time.”

But what was strange, said Luetkemeyer, was that he was still working in aviation. “In the 1990s, I worked for Flexjet in Dallas, not as a pilot but doing their IT. I also worked for Aerospace Products International in Memphis, which worked with companies including Piper Aircraft and Gulfstream,” he said.

Last spring, Luetkemeyer told his wife he was either going to retire or keep working and start flying again. “If you want to talk about rusty pilots, that’s me. I’ll be 63 this fall, and a few years ago, I got prostate cancer,” he said.

After getting his third class medical back, he joined the RFC Dallas Flying Club, based at Addison Airport. It has three Beechcraft Bonanzas and a Piper PA-28-180.

“I got out my checkbook and wrote a check to the club for the membership, which was $500 and the initiation fee of $65,” said Luetkemeyer. “I then found a flight instructor and built myself a training curriculum, since I was a CFI in the past.”

Luetkemeyer determined it would take him 15 hours before he could fly again. “The first five hours covered basic airmanship to get a feel for the aircraft again,” he said. “The next five hours were advanced air and pattern work. Then the last five hours was instrument work.” He also did a cross-country flight and a night check, which got him to his goal of accomplishing a flight review and instrument proficiency check in 15 flight hours.

He admitted to “cheating” a little by buying a Microsoft Flight Simulator with add-on aircraft from Carenado—specifically the F33A Bonanza—along with a control yoke, throttle quadrant, and pedals.

“With that, I had what I called a flight training device, which was not a simulator and not legal for logging time. But what it did do was get me back in the habit of scanning instruments, flying some instrument procedures, and using the autopilot,” he said. “I've also used it to simulate trips to some of the airfields I have flown to recently. It is not perfect and not legal for logging time, but it sure helped get back in the saddle. It probably saved me three to five hours of cockpit time, so it more than paid for itself.”

Luetkemeyer started his flight training in July and finished it in December. “I flew twice a week for six weeks, which helps you bring back and retain muscle memory. This helps you get back in the saddle quicker,” he said. “Then from late August until December I flew about once a week. I did my cross country in late December." Now, he's working on getting his insturctor certificate back, "so once I do finally retire, I can flight instruct on the side.”

The RFC Dallas Flying Club was very important in helping Luetkemeyer get back into the cockpit. “I could not have done it without them. The club gave me access to better aircraft that are more suitable for cross-country work. And I wanted to get my ticket back so I could fly from point A to point B,” he said. “There’s a great deal of camaraderie in the club [which] has 100 active and nearly 200 total members.”

The reward, both for him and his wife, was when he flew from Addison to Memphis, Tenn., over Christmas. “It was my wife’s first ride in a GA aircraft. There was something about not having to drive to either DFW or Love Field, park the car, get through check-in and the TSA, get to the gate 45 minutes prior to what you know is going to be a late departure, and late arrival, fight for baggage, then get to the rental car, which is easily six hours,” he said. “We departed on our own time and the FBO had a rental car ready and waiting when we landed. It was three hours door to door.”

Luetkemeyer said he probably spent around $4,300 to get current again, including $3,000 in aircraft rental hours, $600 in instructor fees, the club deposit and initiation fee, and club dues of $360. “It takes persistence, especially if you’re over 60 like me and have medical problems. But if you want to do it, you can.” 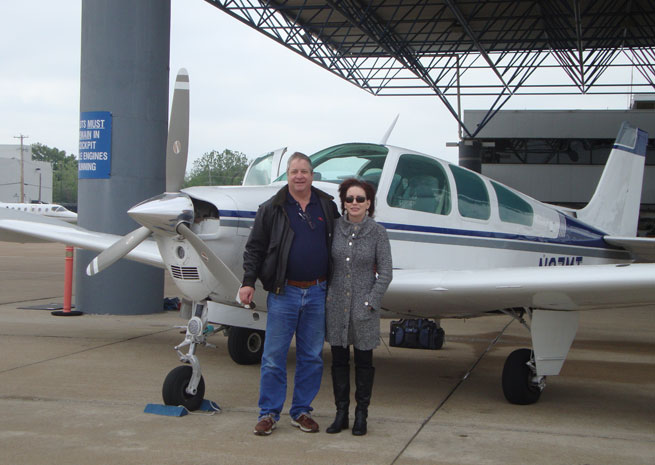