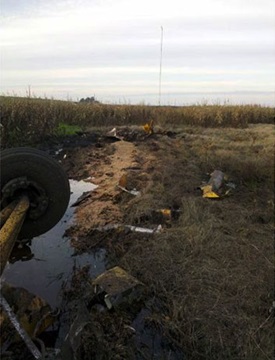 Meteorological evaluation towers, proliferating in recent years with expanded interest in wind energy, can be next to impossible to see until it is too late. Typically rising less than 200 feet above ground (and therefore not subject to FAA approval or review), METs are typically slender structures that blend into the background. In recent years, accidents involving METs struck by agricultural aircraft have claimed four lives. AOPA and other stakeholders and organizations are urging state lawmakers to take action to protect pilots, and Colorado is moving closer to joining the growing list of states enacting legislation that requires tower builders to mark the structures clearly.

The Colorado House of Representatives has approved a bill that would require the marking of METs and other guyed structures more than 50 feet above ground in rural areas of the state. The measure was approved unanimously April 17 by a Senate committee, following written and in-person testimony from AOPA and other aviation groups, and awaits a final Senate vote.

AOPA has supported similar measures in more than a dozen other states that have taken action to date, and AOPA members in Colorado should contact their state Senators to encourage final approval of this important legislation. AOPA Northwest Mountain Regional Manager David Ulane collaborated with the Colorado Agricultural Aviation Association and other stakeholders to develop the language of the Colorado bill. Ulane also participated in a legislative forum on the issue hosted by the Colorado Agricultural Aviation Association in November, and contacted key lawmakers to make clear the association’s strong support for legislation that protects a variety of lawful aviation operations, including aerial firefighting, medical response, and rescue.

The legislation was sponsored by state Rep. Jerry Sonnenberg (who is also an AOPA member), and Sen. Greg Brophy. The newly formed Colorado General Aviation Alliance has also backed the measure.