Get the app Get the app
AOPA will be closed July 4th, in observance of the Independence Day holiday. We will reopen at 8:30 am ET on Tuesday, July 5.
News & Media Rotorcraft Rookie: New landing sites

I think it was the second lesson when I mentioned to my instructor that I had a major goal in training—to land off-airport. This week I finally got to do this solo—sort of.

Understandably the flight school doesn’t encourage students to squeeze the helicopter into anywhere they can. Off-airport landings are allowed, but generally only after earning a certificate, and even then the site must be approved by an instructor. After experiencing the differences in fixed-wing flying between flight training and real-world flying, I wanted to do what I could within reason to replicate the capabilities of the helicopter while still in training. A heliport is the next best thing.

Public-use heliports are few and far between. Although Helicopter Association International maintains a database, it’s generally organized by name or state. And what’s not few and far between are private heliports. That means sifting through hundreds of listings to find maybe one heliport—or not. I switched over to AirNav, which has a nifty function that enables a search of public-use heliports by state. And luckily for me, there’s one fewer than 25 miles away.

An earlier story discussed the ways in which a helicopter pilot assesses an off-airport landing site. Even though I was planning to go to a charted, public-use heliport, I didn’t want to take any chances. So I did what I could beforehand to stalk it over the Internet. Google Earth is an incredible resource. Satellite views clearly show the approach and departure path, and if there are street-level photos even standard rural telephone poles are easy to spot. Obviously you can’t rely on this information, but it’s an excellent first step to determine if a landing is even possible, and it gives a great mental picture if you decide to go.

I also used the tried-and-true method of calling to get local information. This is a great tactic for anything other than a long paved runway, and it’s practically essential for airplanes using grass runways, airports with special procedures, and newbie helicopter pilots. 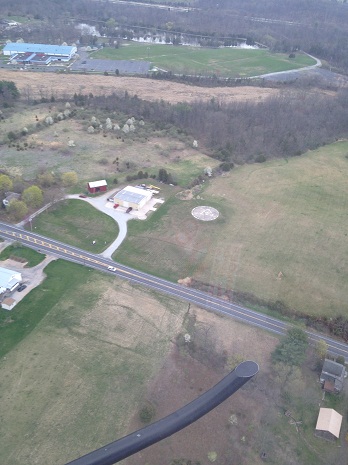 Unfortunately they never answered the phone, but I felt confident of being able to make the approach and a safe landing based on the satellite photos. This particular heliport, Southern Adams County (P98), has a landing pad located in an open field, allowing for really gradual descents and fairly easy departures. There are some low wires a few hundred feet to one side, but even in an R22 it’s easy to clear these without cheating into the height-velocity diagram too much.

Conveniently, I still needed .9 of cross-country time to meet the three-hour requirement. Helicopters are only required to fly 25 miles for a cross-county, but the heliport is a bit less than that. So I planned to overfly it, make a quick approach and set-down in Gettysburg, and then come back to the heliport. This allowed for another quick survey from the air as I cruised overhead. That pass was enough to confirm that the satellite photos were pretty accurate and the site was worth a closer look. After a quick stop at Gettysburg I was on my way back.

Helicopter traffic patterns are only about 500 or 600 feet above the ground, which allows for a close look at the landing site, but also puts you closer to towers and wires. I waited until I got close, then ventured down for the first pass, what’s called a high recon. Then it was down to a lower recon at 300 feet above the ground and a setup for the approach.

The clearing for P98 is large enough that the approach can be made in a profile somewhere between normal and steep, which is a perfect illustration of why this kind of exercise is important regardless of the type of aircraft being flown. The process of gathering information, making a decision, creating alternative plans, factoring in a safety protocol, and then adapting a technique to suit the conditions is infinitely more important than executing a perfect technique at a familiar airport. Accidents are predominately caused by a lapse in judgement, not technique or ability.

After a quick set-down and take off I was out of there, back to home and with another requirement knocked off. As I write this, I’m 0.8 hours short of the 10 hours of required solo with a checkride imminent.