Get the app Get the app
AOPA will be closed July 4th, in observance of the Independence Day holiday. We will reopen at 8:30 am ET on Tuesday, July 5.
News & Media Baker to speak at Great Alaska Aviation Gathering 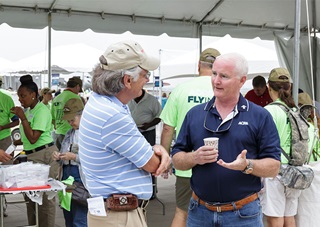 AOPA President Mark Baker said he is looking forward to meeting members of the Alaska aviation community at the largest aviation event in the state. The Great Alaska Aviation Gathering, organized annually by the Alaska Airmen’s Association, will be held at the FedEx Maintenance Hangar at Anchorage International Airport May 3 and 4.

The event will feature a keynote address by Baker. AOPA government affairs and membership services staff, as well as the AOPA Insurance Agency, will be on hand. As AOPA celebrates its seventy-fifth anniversary, Baker will share his vision for the next 75 years. Joining him for the presentation will be Adam White and Josh Overturf of the Alaska Airmen’s Association, who will discuss the importance of partnerships to address aviation issues in the forty-ninth state. FAA Administrator Michael Huerta also will attend the show.

This year Sen. Mark Begich (D-Alaska), co-chair of the U.S. Senate General Aviation Caucus, has invited other senate caucus members to attend the event and learn what GA means to Alaskans. Begich will also hold an aviation town hall on Sunday morning for a Q-and-A session with pilots, where he will be joined by Baker and Huerta.

Announcements are also expected on a local GA safety initiative, including FAA changes to the common traffic advisory frequencies in the Matanuska-Susitna Valley. AOPA Alaska Regional Manager Tom George has been part of an industry-government working group that studied and recommended changes that are expected to be announced at the event.

Members are encouraged to visit the AOPA booth for details and to renew their membership and learn more about AOPA’s Alaska insurance coverage.

The trade show includes more than 275 exhibitors, an aircraft static display, and seminars on topics including GA safety, stall/spin accidents, and aircraft retrieval. Admission is free, youth activities are included, and the public is invited.