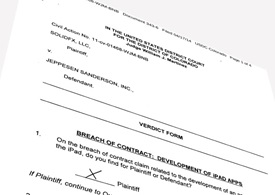 A federal jury in Denver awarded $43.1 million in damages to a tiny software firm in Massachusetts following a civil trial over allegations that Jeppesen Sanderson, a division of Boeing, violated a deal to develop software for reading Jeppesen charts on mobile devices.

Whether that 2009 contract, which predated the release of Apple’s iPad in 2010, covered software development for Apple’s now-ubiquitous device, remains a matter of dispute.

SolidFX, founded by a husband-and-wife team in Foxborough, Mass., has been effectively out of business for three years, though the company has continued to support customers who purchased more than 800 dedicated chart reading tablets developed by SolidFX before Apple’s iPad took over the market, according to one of the small firm’s founders.

Jeppesen maintains the contract did not entitle SolidFX to develop an application to read Jeppesen charts in the iPad.

“We strongly disagree with the verdict in this case,” said Jeppesen spokesman Mike Pound, in an email to AOPA. “Jeppesen has complied with all of our contractual and legal obligations to SolidFX. We believe we have significant grounds for appeal and will pursue them vigorously.”

Jeppesen, based in Englewood, Colo., is a leading provider of aviation navigation charts and data used in commercial and general aviation. Pound said the April 17 verdict will not force changes in the company’s offerings.

“We do not expect the decision to have any impact on the price or availability of our products,” Pound wrote.

A University of Denver law professor told The Denver Post  in early April that the case may impact other existing contracts between application developers and content owners, and future contracts will likely be drafted to make clear what rights each party has with respect to the various platforms. SolidFX claimed Jeppesen refused to provide critical data that SolidFX needed to create a chart-reading application for the iPad, and concealed its plans to develop such an application on its own.

“We are very pleased with the verdict, in particular that all 6 claims submitted to the jury were decided in our favor,” wrote Jeff McDonald, who founded SolidFX with Dona Flamme, in an email to AOPA. “We are prepared for any Jeppesen/Boeing appeal and are committed to see this process to successful conclusion.”

McDonald said that SolidFX has been effectively out of business since 2011, though a small support staff was retained for another year to service customers who purchased the company’s own chart-reading tablet, the FX8.

“Since then, we have continued to support customers even though all products sold are well beyond the warranty period, at expense to us,” McDonald wrote. “While many customers have moved to the iPad we felt strongly it was important to support those who supported us.”

SolidFX sought $78.6 million in damages, claiming that Jeppesen took their idea and turned it into a $50 million-a-year business, and effectively drove SolidFX out of business. Jeppesen countered that the iPad was not covered by the 2009 contract.

SolidFX attorneys, the Denver firm Davis, Graham and Stubbs, argued the 2009 contract had anticipated future platforms such as the iPad, and that Jeppesen knowingly concealed its plan to develop an iPad app from SolidFX. Emails presented during the trial persuaded the jury that Jeppesen officials acknowledged that the SolidFX contract covered the iPad, while at the same time concealing the company’s plan to develop its own application.

Following the verdict, jurors told The Denver Post that this was a case of a large company taking advantage of a small one, and that Jeppesen failed to uphold its end of the bargain.

Jeppesen attorneys argued at trial that SolidFX was attempting to revise the terms of the deal after the fact.