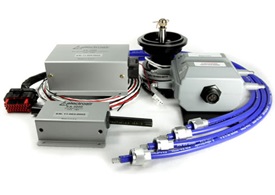 Three years after landing the first supplemental type certificate for its electronic ignition system, Electroair now has every normally aspirated Continental covered, along with much of the Lycoming lineup used in certified aircraft.

Electroair President Michael Kobylik announced July 31 at EAA AirVenture the latest additions to the approved model list: The normally aspirated Continental 470 and 520 series, and Lycoming’s 540 series engines have been approved for ignition by the EIS-61000 series electronic ignition systems. The kits replace one of the two magnetos, and have demonstrated improved fuel economy (10 to 15 percent) along with increased horsepower (and the speed that comes with it), smoother operation, and reduced maintenance costs (there is no TBO for the electronic systems). Factoring in the reduction in spark plug fouling and increased plug life, Electroair systems can conceivably pay for themselves in a few hundred hours. The four-cylinder versions cost $3,400, and kits designed for six-cylinder engines cost $5,500.

Kobylik said more than 500 systems have been installed in certified aircraft to date, and users report fuel savings approaching or surpassing a gallon per hour in four-cylinder installations, with six-cylinder engines reducing consumption by up to two gallons per hour.

There remains a significant gap in the approved model list, about 5,000 D-series engines from Lycoming that use a single-drive magneto in which both sides are combined into a single unit. Many Cessna and Piper aircraft produced in the 1970s use these engines, and Kobylik said the company has begun preliminary engineering, and will start the design work “in earnest” in 2015.

“It’s a huge group,” Kobylik said. “We know the demand is there.”

Electroair also orchestrated  autograph sessions with Spencer Suderman, who set a Guinness World Record in March flying 81 inverted flat spins in a Pitts S-2B fitted with an Electroair ignition system (the company sponsors Suderman, who has flight tested its systems).