Get the app Get the app
Already a member? Please login below for an enhanced experience. Not a member? Join today
News & Media Pilots: Helen Cernik, Piston Single Ferry Pilot 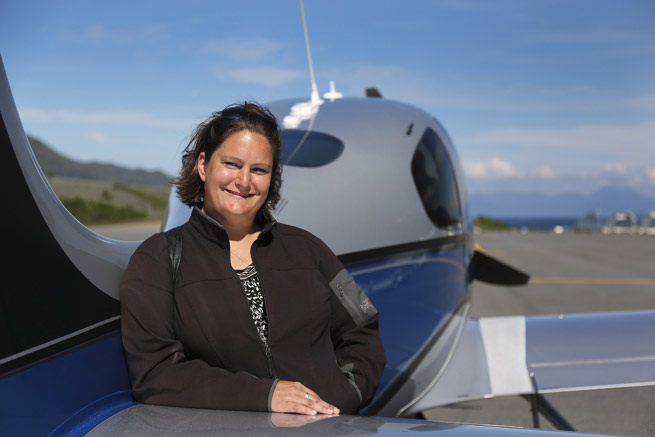 Helen Cernik is no stranger to stressful journeys. As a U.S. Army truck driver, she made countless convoys between Kuwait and Iraq during the second Gulf War in 2003, and again when she was recalled to the service in 2007. She’s also made a dozen ocean crossings (nine Atlantic and three Pacific) in single-engine piston aircraft, mostly Cirrus SR22s and SR20s.

Cernik, 32, a full-time Cirrus instructor in Seattle, Washington, regards the international ferry trips as perks. “They’re a fun change of pace from the Cirrus transition training and instrument training that’s my bread and butter,” she said. “I got accustomed to hurry up and wait in the military, and there’s some of that in ferry flying, too.”

Cernik’s first transatlantic Cirrus flight in May 2010 involved an unplanned eight-day weather stop in Goose Bay, Canada. “I was a bit apprehensive about the over-water flying at the beginning of the trip,” she said. “But after eight days of watching the weather, TV reruns, and total boredom, I couldn’t wait to get back in the airplane.” The biggest building in the town near Goose Bay is a liquor store, which told her all she needs to know about local entertainment options.

Cernik said weather is the biggest challenge in Atlantic crossings. But since the longest leg is 675 nm, the airplanes she flies typically don’t require ferry tanks or other modifications. Pacific crossings cover much greater distances—typically 2,000 nm at a time—so ferry tanks are essential. But weather decisions usually are simpler, there are more options for places to divert, and she doesn’t wear a cumbersome immersion suit.

She’s delivered airplanes to Europe, Hawaii, Singapore, and Australia. She also takes part in an annual summer fly-out to southeast Alaska with a group of Cirrus pilots based in the Northwest.

Cernik said she wanted to become an airline pilot when she started flight training. But she enjoys teaching so much that she doesn’t intend to change careers. “Somewhere along the line I fell in love with flight instruction, with Cirrus Aircraft, with our clients, and with the variety of flying I get to do,” she said. “My original goal was to join a regional airline and eventually become a Delta captain and live in a big house in Park City [Utah]. But I honestly think I’m happier doing what I do now.”