Get the app Get the app
AOPA will be closed July 4th, in observance of the Independence Day holiday. We will reopen at 8:30 am ET on Tuesday, July 5.
News & Media Pilatus rolls out PC-24 bizjet prototype

Swiss manufacturer Pilatus Aircraft rolled out its first prototype PC-24 twin bizjet Aug.1 in a dramatic unveiling before thousands of spectators, as the nation celebrated a national holiday.

Three prototype PC-24s will be produced, with the maiden flight of a prototype expected next spring, Pilatus said. Certification of the $8.9 million aircraft, which was introduced last year, is seen coming in 2017. 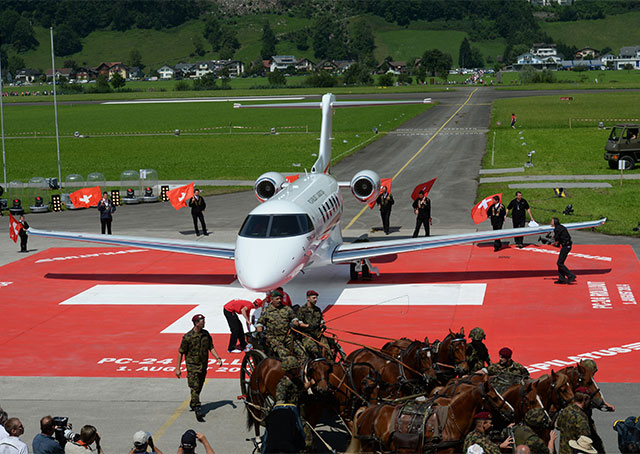 In May 2014, Pilatus sold 84 PC-24s at the European Business Aviation Conference and Exhibition.

The Aug. 1 rollout ceremony took place during the Swiss National Day holiday. The prototype was drawn from its production facility at Buochs Airfield in central Switzerland by a team of 24 horses as an estimated 25,000 spectators looked on.

The manner of presentation was meant "to symbolize the number appearing in the PC-24 product name and its future mission profile as a 'workhorse,'" Pilatus said in an announcement. The ceremony also included a fly-by of all aircraft "which have ever reached series production in the company's 75 year history."

"Today's celebration is a clear sign of our commitment to Switzerland as a centre of vision and action," said Pilatus Board Chairman Oscar J. Schwenk. "Our company was established here in Stans exactly 75 years ago. We have seen our activities grow and expand here in Stans, and this is where we want to be in the future."

In August 2013, AOPA took a first look at the aircraft that will be powered by two FADEC-controlled Williams FJ44-4A turbofans each producing 3,600 pounds thrust, with 5,000-hour times between overhaul.

Pilatus also touts the PC-24 as "the world's first ever business jet to come equipped as standard with a cargo door, with the kind of performance specification that allows it to operate in and out of very short runways or even unmade strips." 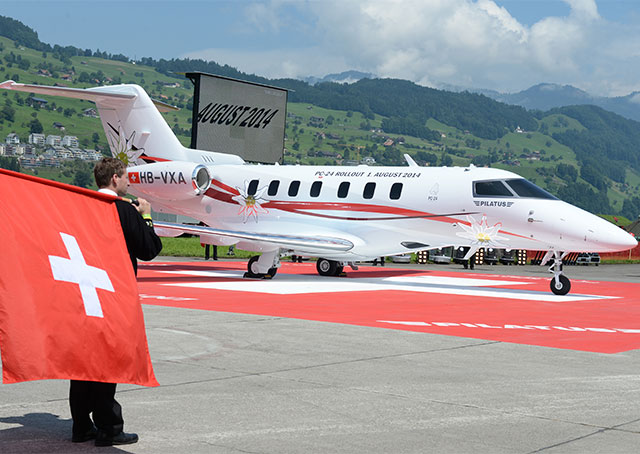