Get the app Get the app
Already a member? Please login below for an enhanced experience. Not a member? Join today
News & Media P&E Never Again: Uphill battle

After nine years of high-powered performance, my partners and I sold our Beech Debonair. I was not ready to hang up my goggles, so I found a nice Aeronca 7EC Champ that had been modified with a 100-horsepower Continental O-200 engine and a climb prop. 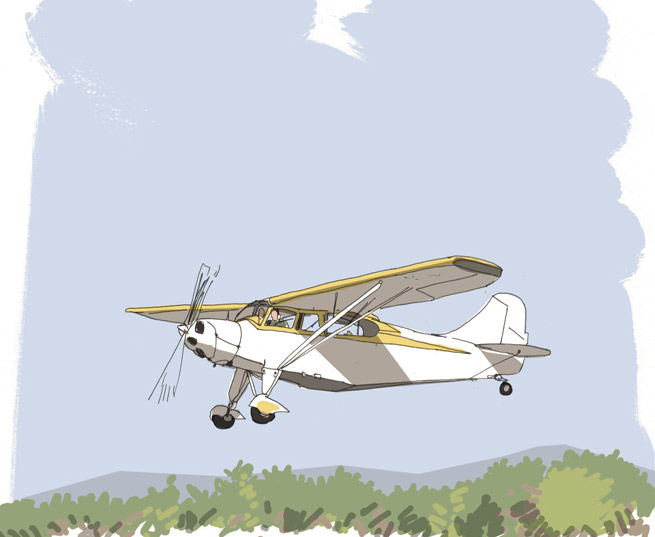 After nine years of high-powered performance, my partners and I sold our Beech Debonair. I was not ready to hang up my goggles, so I found a nice Aeronca 7EC Champ that had been modified with a 100-horsepower Continental O-200 engine and a climb prop. Now I could not go very fast or very far, but I sure had a short take-off roll.

About a year later, and with 40 or so hours in the little gal, I decided to fly about 30 miles to the west to a big Saturday fly-in at Peach State Airport, near Williamson, Georgia. Peach State has a downhill grass runway similar to that of Seven Lakes, our home patch, near Jackson, Georgia. It was a cool morning with a forecast of much warmer temperatures as the day went on. A nice little breeze was blowing out of the northeast, but that was no concern to me, taking off downhill to the south at Seven Lakes. The Champ would leap into the air as usual.

I had half a tank of gas (about 13 gallons) and planned to top off the tanks at the fly-in. Just before departure a good friend asked if he could fly over with me. He was an ultralight pilot and had heard it was bumpy upstairs, so he did not want to bounce his way over. My friend is a bit stocky, but I did some quick mental calculations and decided I would be legal to take him with me.

So off we went, expecting to be airborne after a slightly longer takeoff roll. This did not happen. I cannot say how much farther we rolled, but it was enough that I actually glanced down to see if I had left the carb heat on. It was off. I decided the little tailwind must be the culprit.

We got airborne with runway to spare and turned out of traffic, heading for the fly-in. On the way, I reflected on the long takeoff roll and decided that I might not buy any 100LL, as it would be considerably warmer when we departed for home.

Upon arrival at Peach State, we learned that airplanes were landing to the southeast—uphill—which worked out OK, because all the airplanes were parking at the far end of the runway, where the food and drinks were. The northeast wind favored this, as it gave us a slight left quartering headwind for landing. Many airplanes also were taking off uphill, hopping rides, fly-bys, and all that. Seeing this and recalling the longer takeoff we had just made, I decided not to buy any fuel. Probably the only good decision I made all day.

Some three or so hours later, with airplanes still departing and arriving in the warmer noontime hour, using the uphill runway, we decided to head back home before it got any hotter. As no one was departing downhill (conflicting traffic) I just went all the way to the end of the uphill runway, spun around, and shoved the throttle forward.

The first part of the runway was sort of level, so we got to about 45 mph reasonably soon (she stalls at about 38 mph) and lifted off. But this was where the runway started going uphill, and it was going up as fast as we were climbing. I thought about aborting the takeoff, as I knew there were pecan trees at the end of the runway, but I pressed on.

The northeast wind was blowing us toward the south side of the runway. I did not want to risk a bank at such a slow speed, so I just let her drift over that way, which was taking us toward the crowd—who were all watching my approaching airshow. But the runway leveled out for about the last third, and our very, very slow climb now was actually accomplishing something. Even so, I could see those trees looming ahead!

I lowered the nose just a shade and got the airspeed up to about 50 mph and thought about making a right turn toward lower terrain to the south, but that would take us right over the big crowd for sure, a real buzz job. After a few more seconds it appeared that we would be above the trees, so I started a very slow turn to the left, away from the crowd. I estimate we passed over the trees no more than 50 feet above the tops.

At about 1,500 feet I got my breath back and commented to my passenger that I was very glad I had not taken on more fuel. He was talking now and very much in agreement.

After putting the little gal back in my hangar, I asked my friend what he weighed. I was astounded to learn that I had misjudged his weight by about 50 pounds. While I was legal (barely) throughout the flight, I was not smart. If not for 100 horses and a climb prop, I might not be writing this article.

I can think of several things I did wrong that day, but never again will I launch uphill under such circumstances. If need be, I will just wait until everyone has gone home and then depart downhill.

Jim Holder is a retired Eastern Air Lines captain who later flew for American Trans Air. He is active in the Retired Eastern Pilots Association (REPA) and The Silver Falcons (another retired Eastern pilot organization) and is editor of REPArtee, the official REPA magazine.