Get the app Get the app
AOPA will be closed July 4th, in observance of the Independence Day holiday. We will reopen at 8:30 am ET on Tuesday, July 5.
News & Media Weigh in on new pilot standards

Weigh in on new pilot standards 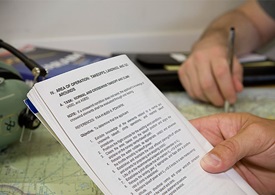 AOPA encourages pilots to review and comment on new draft airman certification standards for the commercial pilot and instructor that were published in June.

The new standards will not change current requirements for aeronautical knowledge or practical testing, but rather clarify what is expected and eliminate extraneous (and potentially confusing) information, FAA Administrator Michael Huerta noted during an appearance at EAA AirVenture this year.

AOPA leads the working group that was created by the FAA to foster a collaborative approach with the industry to update the written and practical test standards for airman certification. Building upon the previously developed foundational private pilot airman certification standard (ACS), the new draft standards for the commercial pilot and instructor were published in the Federal Register in June for public review and comments, due Aug. 25. AOPA submitted comments in July.

The FAA tasked the working group with enhancing safety by more clearly aligning test standards with related training and reference materials. The goal is to use the ACS to ensure that written and practical test questions and tasks are all aligned with clearly defined standards of what pilots are expected to know and demonstrate. The ACS also will help ensure that FAA H-series handbooks and other guidance materials are consistent with the knowledge and skill standards. Resulting new tests and questions will be more relevant and meaningful, ensuring that pilots who earn certificates and ratings have the required knowledge, skills, and risk management techniques and strategies.

AOPA has been involved in every step of the process that led to development of the new draft standards and eventually an integrated and holistic airman certification system. The draft standards are currently being beta tested using a multi-phase process making the formal, nationwide switch at least a year away. David Oord, AOPA manager of regulatory affairs and chair of the working group, gave a presentation on the new standards during EAA AirVenture in Oshkosh, Wisconsin.