Get the app Get the app
AOPA will be closing at 1:45pm ET on Tuesday, December 6th. We will reopen Wednesday morning at 8:30am ET.
AOPA Members DO more LEARN more SAVE more - Get MORE out of being a pilot - CLICK HERE
News & Media Training Tip: R in a circle

Training Tip: R in a circle

A student pilot spreads out a sectional navigation chart and draws a course line for tomorrow’s cross-country, taking note of a variety of features along the route. Obstructions, maximum elevation figures, airspace classes, and prominent landmarks for visual navigation all come in for scrutiny and help determine cruise altitude, the route of flight, and the selection and spacing of checkpoints.

In many areas of the country, an examination of the local sectional chart reveals numerous examples of an airport symbol appearing as a capital R enclosed by the circular unpaved-airport symbol. For example, three such airfields are shown in the short distance between Montana’s Kalispell City Airport and Flathead Lake on the Great Falls Sectional Chart. Several other such airports are located east and north of Kalispell.

The sectional chart legend explains that an airport identified in this manner is private, that is, "non-public having emergency or landmark value." Notice that adjacent to the private airport symbols appearing here and there on your local area’s sectional chart is the notation "(PVT)," along with the airport’s name, field elevation, and runway length.

Here’s a related question that you might be asked by your flight instructor or your designated examiner: Why are private airports identified with the letter R in a circle, not a P?

For the answer, seek out the Chart User’s Guide, where it is explained that the R-in-a-circle symbol signifies a "restricted or private" airport with a soft-surfaced runway, or a hard-surfaced runway less than 1,500 feet long. "Use only in emergency, or by specific authorization," it cautions. (Hard-surfaced private airports with longer runways are depicted and noted according to the appropriate symbol.)

Knowing of the presence of a private strip near or along your course can be useful even if it is not possible under normal circumstances to land there, so make the effort to locate such strips from the air as you pass by. Some will be easier to spot than others—but in any case, it’s good to know that there is a runway within reach if you need it in an emergency such as an engine failure, critically low fuel, or the need to make a precautionary landing because of rapidly deteriorating weather.

Your arrival might be unexpected, but the strip’s owner is likely to be glad you chose to drop in rather than select riskier alternatives under adverse conditions. 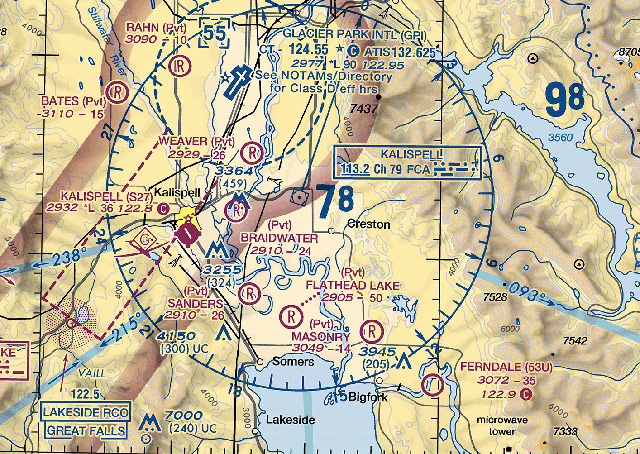