Get the app Get the app
News & Media Beechcraft, Cessna flying clubs merge

Don Woodward is the club manager who was charged with merging the groups. “Both Beechcraft and Cessna had flying clubs with great traditions, but it only  made sense after the merger under Textron to join forces and make the club even better,” he said. “Beechcraft and Cessna employees are excited about the merger. Both clubs have a long, proud tradition, and we want to keep honoring that.”

The fleet under the merged clubs includes 22 aircraft, said Woodward. In the Beechcraft line, the club has four Sundowners and five Bonanzas; in the Cessna family, it has six 172Ss, two 206 Turbos, one 182, one Turbo 182, one 172RG, one 182RG, and one Skycatcher. “It’s exciting for both groups because Beechcraft members can now train in the 172, one of the best training aircraft ever built, and Cessna members now have access to the Bonanza, which is a great aircraft.”

The number of members of the Textron Aviation Employees’ Flying Club is still rather dynamic, but it’s about 480 members after the merger, said Woodward. “Those eligible to join are Textron Aviation employees based in Wichita and their families, along with retired employees,” he said.

The membership deposit is $250 for employees and $350 for families, while monthly dues are $26.50 a month per person. Rates for the club aircraft range from $50 an hour for the Skycatcher to $135 an hour for the Turbo Stationair.

The club operates an FAA-certified Part 141 flight school. Using a Cessna 172 for training, the approximate cost to get a private pilot certificate is $8,308, based on 70 hours. “Almost half of our flying is flight training. We train people from the beginning on up to CFII,” said Woodward. “People can also get their single-engine ATPs here too. We have a whole range of ratings.”

The merged club is now based at Beech Factory Field, said Woodward. “The Cessna club was based in a leased facility at Mid-Continent Airport,” he said. “The Beechcraft facility is owned by the company, so it made good financial sense to move.”

The merger of the two clubs is still ongoing, said Woodward. “The change is exciting and challenging at the same time. Our challenge is to maintain the proud tradition of each club, but we have to move toward the future,” he said. 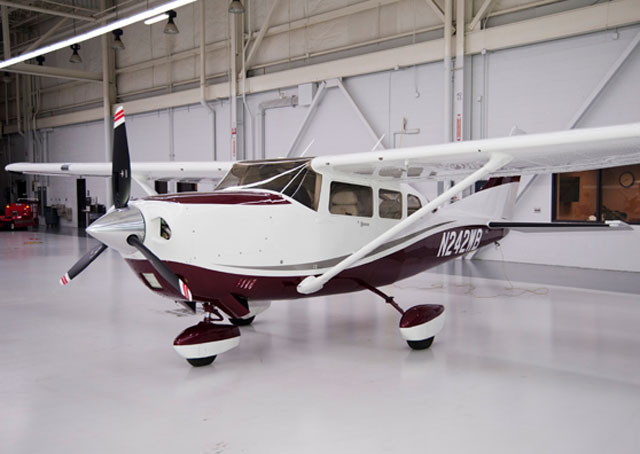