A smashed champagne bottle and a celebrity’s first ride marked the ceremonial start of a new age in Goodyear airships, launching Wingfoot One, the newest Goodyear Blimp (if you will) during an Aug. 23 ceremony in Suffield, Ohio.

Robin Roberts, co-anchor of ABC News’ Good Morning America was tapped for christening duty in part because of a family connection.

“In 1918, my great-grandfather was recruited by Goodyear and moved his family to Akron for a better life. A number of other relatives have worked there too,” Roberts said (her comments were distributed via press release). “I don't think my great-grandfather could have imagined that one of his descendants would be asked to christen the Goodyear blimp. I'm so honored.” 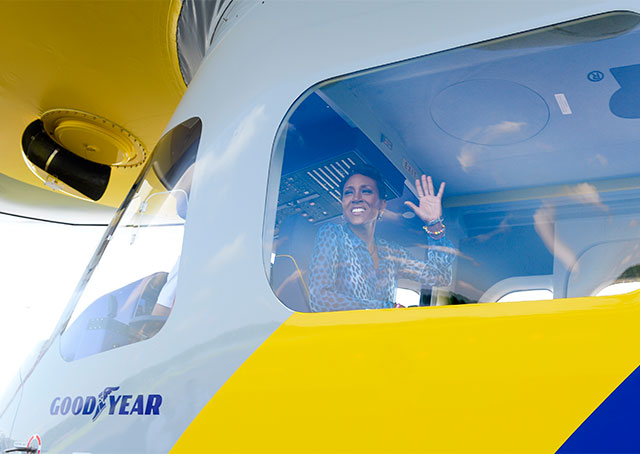 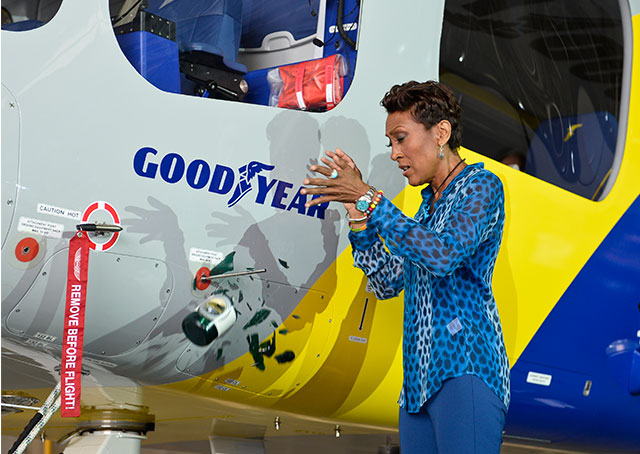 The airship was custom-built by Goodyear and Germany’s ZLT Zeppelin Luftschifftechnik, and ushers in a new era for an iconic brand. The new airships are faster, more maneuverable, and use a fly-by-wire system to control thrust-vectoring engines that allow the new airship to launch and recover without relying on a large crew to wrangle it with ropes. The new airship is the first in a series that will replace a fleet of blimps that have become familiar sights over sporting events. Goodyear has flown its blimps on publicity missions since 1925, and will replace the two remaining GZ-20 blimps over the coming four years. Goodyear began making blimps for military use in 1917.

Goodyear held an online contest to give Wingfoot One its name, drawing 15,000 entries. The winner, Charlotte White of Akron, Ohio, will get to spend the day with the airship as her prize.