Get the app Get the app
Already a member? Please login below for an enhanced experience. Not a member? Join today
News & Media Chicago steakhouse features vintage aviation photos

The décor of the new PM Prime steakhouse at Chicago’s North Shore celebrates pioneers in the history of aviation through an extensive collection of more than 200 original black-and-white photographs collected by owner, pilot, and AOPA member Steve Platcow.

Images hanging on the wall at PM Prime include pioneers of flight like the Wright brothers, Amelia Earhart, the Tuskegee Airmen, and Jimmy Doolittle. “I started collecting these photographs when I was 10, and I’m now 48. I wrote to newspapers asking for archival photos of aviation pioneers,” said Platcow. “Most newspapers sent them because they didn’t really feel there was any value or use for them anymore.”

Many are original photographs taken by photographers more than 70 years ago, said Platcow. “Most of them still have the wax and original markings on the back.”

Platcow began the collection after he wrote a report about Lindbergh. “I decided [aviation] was an area of science I wanted to pursue,” he said.

Although Chicago is famous for its steakhouses, the North Shore, an affluent area, does not have this type of restaurant, said Platcow. “Other steakhouses have some cuts prime and some not. We’re offering 100 percent prime, from the least expensive skirt steak to rib eye,” he said. “We get our beef from a ranch in northern California, and our seafood comes in fresh daily.”

PM Prime customers are experiencing world-class amenities that they would not typically find in a suburban setting, said Platcow. “We have a James Beard-nominated chef and a Beard-winning general manager/sommelier,” he said.

When he got married, said Platcow, the photos came off his walls and were placed into storage. “And now they are in the restaurant,” he said. “I wanted to celebrate human achievement in the sciences. Because I’m a pilot, I hope that the photos will inspire customers.” 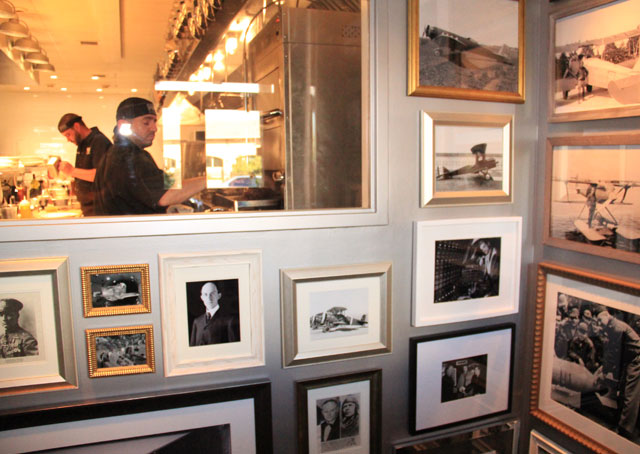