Get the app Get the app
AOPA will be closed July 4th, in observance of the Independence Day holiday. We will reopen at 8:30 am ET on Tuesday, July 5.
News & Media Letters: Flexible Fliers

Readers commented on our special focus on gliders, which featured stories about the aircraft and the people who fly them.

Readers commented on our special focus on gliders, which featured stories about the aircraft and the people who fly them. 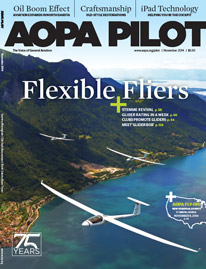 I read with great pleasure Tom Horne’s article on the Stemme S10 (“Power Sailing”). I am a longtime pilot and at one time had thought about getting my glider rating. To that end, about 15 to 20 years ago (time does funny things to the memory) I saw that there was a glider expo in one of the Chicago suburbs, so I went there to see what it was all about. One of the airplanes there was a Stemme S10 and with it was Dr. Stemme himself. It was such a great pleasure to meet him. He was warm and friendly, and we must have talked for more than a half an hour about his airplane and gliding in general. Thank you so much for bringing back such a wonderful memory. 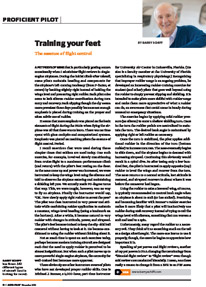 “Thank you AOPA! Never before have I sent emails to about 100 of my flying friends recommending that they read several articles in a single magazine. Your November issue of AOPA Pilot did a wonderful job of spreading the word about soaring and touring motor gliders.”

“The ‘Training Your Feet’ article was spot on. I can tell when someone I fly with is a Cherokee pilot the moment we lift off, because the airplane immediately starts drifting to the left. I wanted you to know that some of us still concentrate on stick-and-rudder flying at the primary level—and beyond.”

We in the glider world are well aware of the dangers of the use of the rudder in a skidding turn. The stall/spin accident in the turn from base leg to final is almost always the result of the use of too much rudder and not enough bank, resulting in a stalled inner wing and a spin. This accident probably occurs more often with a glider when there is a misjudged approach with not enough altitude and airspeed—which can be corrected with power in an airplane, but not in a glider. I thank you for your continued references to gliders and the skills that glider pilots have learned.

The Michael Banner rudder exercise Barry Schiff described only begins to demonstrate the capabilities of the rudder. When flying radio-control model airplanes first became popular in the 1950s, rudder-only control was pretty common. It didn’t take long before folks figured out how to control pitch using just the rudder, and then began doing loops and rolls—perhaps not up to IAC standards, but it worked. A couple of years ago when I acquired a J–3, I took it up to a safe altitude and tried rudder-only flying. No, I didn’t and don’t intend to try rudder-only loops or rolls in the J–3. It was fun flying around for a while with my hands off the stick and throttle while I changed direction and altitude using only the rudder.

I totally agree with Barry Schiff about training your feet. Just a few years ago flying a de Havilland Beaver on floats under Part 135, we had a leg that was Part 91. A high-time 737 captain for an unnamed airline wanted to fly, so I let him have the controls. Even after some gentle suggestions, the passengers in the back—friends of his—asked me to take the controls back. Afterwards we all joked that rudders in 737s are for emergency use only.

I also agree with the FAA changing the terminology to “flight review.” Just take a look in any logbook or on boards at airports advertising for “Biannual Flight Reviews.” Who wants to do that twice a year—or with an instructor who does not know the difference? After all, we are supposed to be able to “read, speak, and understand the English language” to get a certificate.

Here’s my take on why the terminology change from Biennial Flight Review to Flight Review. Too many people were unfamiliar with the term biennial and were calling it a biannual flight review. Back in my flight instructing days, many times a pilot would schedule some time with me asking for a biannual flight review. I would usually inform the pilot he only needed a review once every two years—but, if he preferred, we could do it twice every year. Normally the response would be to go every two years.

How to fly an airplane

I found myself mesmerized and vigorously nodding my head as I read the “P&E: Ownership” column (“How to Fly an Airplane”). I am married to a teacher of young children and, as a passionate aviator, I am occasionally asked to explain how and why airplanes fly, and how to pilot one.

My education in physics often draws me to aerodynamics and cause/effect explanations, but young students quickly demand simple and obvious answers. I offer my heartfelt thanks to Mr. William Dubois, the author, for describing his superb approach to offering a valuable and exciting method to teaching aviation complexity in such a fun and memorable manner.

I intend to emulate his techniques for my next foray into the jungles of the elementary classroom. The feeling of hitting the “sweet spot” with such students is as good as your last greased landing, and the anticipation of the next one!