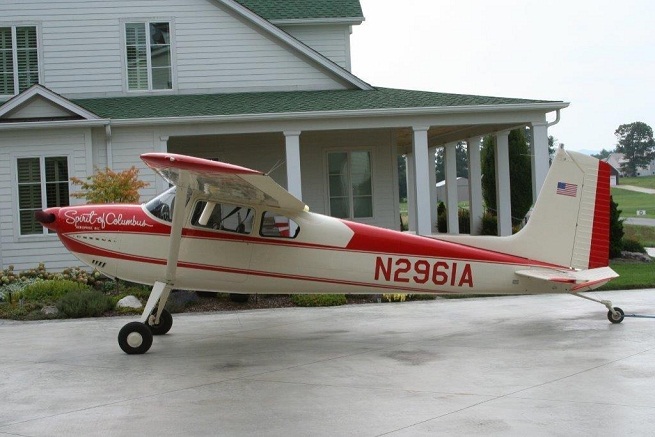 Dick Merrill was a geology student at Ohio State University in 1964 when Geraldine “Jerrie” Mock made national news with her solo flight around the world in a single-engine airplane. He was also a pilot (and the son of a pilot) who had read about Mock in Flying and AOPA Pilot magazines.

Fifty years later, Merrill has paid tribute to Mock and her beloved Cessna 180, The Spirit of Columbus, by duplicating its paint scheme on the 1953 Cessna 180 he owns.

“I called her to ask permission” in January or February 2014, Merrill said. “She answered the phone and said she thought it was a great idea.” He planned to fly it to Florida to show her when the paint job was complete.

Unfortunately, Mock died Sept. 30 at age 88, and didn’t get to see the airplane that now sports her Cessna 180’s livery. She did see photos, which Merrill had sent to her grandson. “He showed it to her and she thought it was her airplane. When she saw that picture, she said, ‘That’s a picture of Charlie!’” he said. Charlie refers to the airplane’s N number, 1538C.

Merrill took his airplane to Dial Eastern States Aircraft Painting in Cadiz, Ohio. Working from photos of Charlie taken at the National Air and Space Museum’s Udvar-Hazy Annex, the shop was able to duplicate the distinctive red and cream paint scheme, down to the scripted “Spirit of Columbus” painted on the cowling. “They did an amazing job just in the quality of the paint job,” Merrill said.

Merrill’s Cessna 180 is the same year as Mock’s—1953. He has owned it for 35 years. He keeps it at Hensley Airpark (04TN) in Chuckey, Tennessee, where he lives with his wife, Virginia, who also is a private pilot.

Before buying the Cessna 180, Merrill was living in Texas and had a partnership on a Citabria and a Great Lakes. He originally thought to purchase a Cessna 170, but when he started looking for one, “I realized that the weight-carrying ability wasn’t all that great.”

The Cessna 180’s previous owner, in Illinois, offered to fly it out to Texas for inspection “and if I didn’t want it, I’d have to buy him his fuel to get back. That was back when gas was a dollar a gallon.” Needless to say, the Cessna 180’s former owner had to find some other form of transportation back to Illinois.

Mock’s Cessna 180 had some modifications for her around-the-world flight—including long-range tanks and a trailing wire radio antenna. Hers also sports wheelpants. “I’d like to get a pair of the old-style Cessna wheelpants,” Merrill said.

Merrill flew his Cessna 180 to Minneapolis in September and had to park it overnight in an open-door hangar. “A lot of people saw it, and several people knew exactly whose airplane it was and came to talk to me when I was getting ready to leave,” he said.

With the paint job complete, Merrill is ready to take the Cessna 180 to airshows and fly-ins in the hopes of keeping Mock’s legacy alive. If you’re going to EAA AirVenture in 2015, you might just see it—he plans to fly it there.