First woman to fly solo around the world

Geraldine “Jerrie” Mock, who in 1964 became the first woman to fly solo around the world, died Sept. 30 at her home in Quincy, Florida, according to news reports. She was 88.

Mock accomplished the feat that Amelia Earhart set out to achieve in 1937. She planned the 29-day flight in the basement of her home in Port Columbus, Ohio. She flew the route in a Cessna 180, The Spirit of Columbus, which had a new 225-horsepower engine and was modified to carry 178 gallons of fuel.

“Jerrie had what all pilots do: an amazing passion for aviation,” said Victoria Neuville Zajko of Frederick, Maryland. “But what made her special is she didn’t think she did anything all that extraordinary. She truly believed that any female pilot could fly solo around the world. That's what made her a truly remarkable role model."

Zajko noted that Mock discussed her news-making flight in March 2014 for a video interview during Women of Aviation Worldwide Week to commemorate the fiftieth anniversary of Mock’s flight. View the video here.

Mock became a private pilot in 1958 and opened a flight school and aircraft rental business. The mother of three from Ohio had no intention of becoming “the first” at anything when she originally began planning the flight, she said in a 2005 article in AOPA Pilot magazine. “I just wanted to see the world,” she said. When she learned that a woman had never flown solo around the world, “it seemed like a fun thing to try,” she said. While Mock planned the flight in the basement of her home, her husband, Russ, obtained financial assistance from The Columbus Dispatch newspaper and an array of aircraft equipment manufacturers. The final route included stops in Morocco, Algeria, Libya, Saudi Arabia, Pakistan, India, and Egypt.

Mock found herself in an unintentional race for the title when she learned that another pilot, Joan Merriam Smith, also planned to fly around the world, tracing Amelia Earhart’s route in a Piper Apache. Mock’s flight had received official sanction from the National Aeronautic Association. Still, she pushed up her own departure date from April 1 to March 19, two days after Smith launched from Southern California. Taking off from Columbus, Mock completed her journey on April 17, 1964, when she touched down at Port Columbus Airport. She landed in the United States 25 days ahead of Smith, who had encountered mechanical and weather problems.

In May 1964, President Lyndon B. Johnson presented Mock with the FAA’s Exceptional Service Decoration; she became the first American and first woman to receive a Louis Bleriot Silver Medal from the Fédération Aéronautique Internationale. The Spirit of Columbus was acquired by Javelin Aircraft and then Cessna, which donated it to the National Air and Space Museum in 1976. The airplane hangs on display in the museum’s Udvar-Hazy Annex in Virginia, though it spent years in storage.

“When I saw her airplane in the National Air and Space Museum’s Paul Gerber restoration facility with its wings removed resting out of the public’s eye in a corner, I investigated and discovered that nobody, even pilots in the aviation family, knew her story,” Airplanista.com Publisher Dan Pimentel told AOPA. “So I negotiated film rights with her in 2002, and spent about six years and several thousand dollars writing a feature film screenplay based on her book, Three-Eight Charlie.” Mock wanted it to be a theatrical production, not a documentary, but “Hollywood was ice cold to the idea and the story, so today I sit on the finished screenplay waiting for someone with an extra $10 million to come along to fund this project,” he said.

Mock’s achievement never achieved the type of national recognition or acclaim that other pioneering aviators received, owing in part to the fact that escalating turmoil in Southeast Asia pushed her story out of the public spotlight. She did continue to fly, setting speed records in a Cessna P206.

“Jerrie Mock is aviation’s forgotten pioneer, and her successful solo flight in 1964 should have placed her in the same league as Charles A. Lindbergh and Amelia Earhart as far as public perception goes,” Pimentel said. “But due to many factors—some self-induced—her flight fell off the national news radar screen immediately after returning home to Columbus, Ohio, and as such, I call this aviation history’s greatest malfunction.”

While she would never admit it, Mock “quietly showed the world—in an era when women were supposed to stay home, bake cookies, and make babies—that females can do whatever they want, including flying airplanes very well,” Pimentel said. “This is a message every young woman should hear if we are ever to bridge the gender gap and increase the percentage of female pilots above 6 percent.”

On the fiftieth anniversary of Mock’s flight in March 2014, Ohio publisher Wendy Hollinger introduced a new generation to Mock’s accomplishments when she posted updates on Twitter and Facebook based on entries from Mock’s 1970 book, Three-Eight Charlie. The book is back in print, available from Phoenix Graphix Publishing Service in an anniversary edition, a paperback version, and a Kindle edition. See the website for details and to purchase. 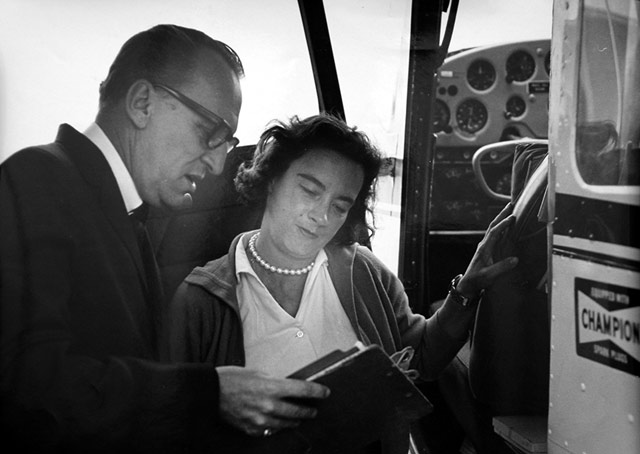