Get the app Get the app
AOPA will be closing at 2:30pm ET Wednesday, November 23rd, and will remain closed Thursday and Friday in observance of the Thanksgiving holiday. We will reopen Monday November 28th at 8:30am ET.
AOPA Members DO more LEARN more SAVE more - Get MORE out of being a pilot - CLICK HERE
News & Media P&E: Never Again

Two in one airplane

If it weren’t for the roar of the 230-horsepower Continental engine, you could have heard a pin drop. We would have preferred to hear the gear drop. 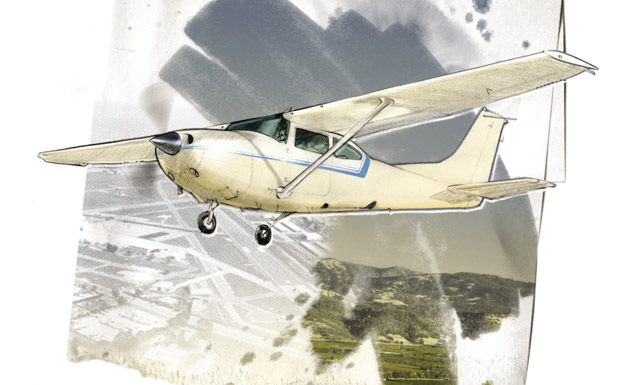 >>Listen to this month's Never Again: Download an mp3 file.

We did a thorough preflight walkaround, exactly as prescribed by the pilot’s operating handbook for N5533S, a retractable-gear Cessna TR182, and then departed San Rafael Airport (“International,” we affectionately called CA35). We headed over San Francisco Bay, across the Golden Gate Bridge at 3,000 feet, and made a quick descent to 1,500 feet to stay under the Class B airspace around San Francisco International (SFO). I was flying left seat; Dan Sorkin (“Pilots,” December 2009 AOPA Pilot) was working radios from the right.

Down the coast of California we cruised, then east from Ventura to Chino to see the Planes of Fame Museum. After aircraft lusting and a light lunch, it was time to head home.

This time Dan took the left seat, and we retraced our route along the Pacific Coast. A look at the fuel gauges suggested that a stop at Salinas (SNS) would be in order, so a few miles out, Dan hit the gear lever. I looked out the window and cheerfully said, “I’ve got one on the right.”

The world’s longest pause was followed by “I haven’t got one on the left.”

If it weren’t for the roar of the 230-horsepower Continental engine, you could have heard a pin drop. We would have preferred to hear the gear drop.

Dan flipped the gear lever Up and the right wheel responded. Down came the lever, and again I had one on the right. Dan had none on the left. Now, it was sweat time.

Open the POH and check: The circuit breaker—nothing. Pump the handle that forces hydraulic fluid into the gear system—no gear action. A hard pull-up to a stall in an attempt to shake the gear loose—no luck.

Time to advise the tower, and do a flyby. We were told the obvious: “You have two out of three. But don’t land on 26. You’ll close the airport. Try (“Try”?) 31. I’ll call the fire department.” (Fire department?)

A few more pumps, stalls, and wiggles were to no avail, and it was time to land on Runway 31. Dan made the most perfect greaser of his more than 50 years of flying. All we could hear was a soothing sandpaper sound as the fuselage gently touched the tarmac. It was utterly quiet—until the blades hit.

The line staff towed the 182 to the hangar and the mechanics put it on a jack. About an hour later, the FBO manager said, “Looks like someone forgot to put the safety wires back when you had the brakes worked on. The bolt must have vibrated loose and jammed in the well.” The POH preflight checklist had said nothing about checking safety wires and brake caliper bolts. Never again would we make the preflight rounds without checking the gear!

You know what happens next: The engine has to be torn down looking for damage. Months later it was returned to us and everything was fine—until one of the owners noticed a few drops of oil on the hangar floor.

“Probably just a nut that needs tightening,” said our friend at the Salinas FBO. “Fly her down, have lunch, and we’ll send you on your way.”

After a thorough preflight (including checking safety wires on the gear) we headed south to Salinas, had lunch, and returned to find the cowl off the 182 and two techs with flashlights looking in.

“What’s the trouble?” we asked.

“Ah, someone at the rebuild facility forgot to torque the nuts that hold the engine cases together. Look, you can unscrew them by hand.”

Once again, you could have heard a pin drop (oh, I used that cliché already), while Dan and I contemplated a gear-up landing in the Pacific Ocean with the engine departing the airplane in pieces to the left and right.

Months later, the airplane was back at San Rafael. We were considering another flight with two admonitions fresh in our minds: Never again trust the POH as the only requirement for preflighting the airplane, and never again trust some well-meaning tech to tear down the engine and almost completely put it back together.

Ron Wren is an advertising and public relations professional who learned to fly at age 60 when an FBO client said, “How can you help my business if you don’t take some lessons?” He and his pinch-hitter wife, Jan, live in Walnut Creek, California.