Get the app Get the app
News & Media Breitling jets plan U.S. tour 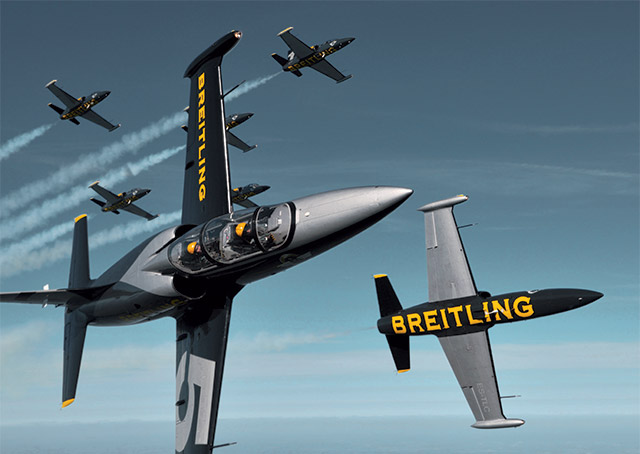 The Breitling Jet Team is coming to America in 2015, with an itinerary of North American appearances that will begin at the Sun 'n Fun International Fly-In and Expo April 20 through 26 in Lakeland, Florida.

The team, sponsored by Breitling since 2003 (when it grew from four to seven L-39 Albatros jets), is making its first North American foray, appearing at major airshows across the United States and Canada, including the biggest of them all: EAA AirVenture. The itinerary was announced Dec. 9 at the International Council of Air Shows convention in Las Vegas.

The team performs a 25-minute routine of precision formation aerobatics similar to a military jet team, and the pilots bring military training and experience to bear, with at least 5,500 hours apiece. Team leader and founder Jacques “Speedy” Bothelin has more than 10,000 hours, and has led the team under its various names and iterations since 1980 when Patrouille Martini hit the airshow circuit with a formation of Mudry CAP 10s.

“We are so excited to share our performances with North American fans and show them what we can do,” Bothelin said in a news release.

Bothelin and his fellow Breitling pilots pride themselves on polish, precision, and safety. The team toured Europe and Asia in recent years.