Get the app Get the app
Already a member? Please login below for an enhanced experience. Not a member? Join today
News & Media Dassault rolls out Falcon 8X 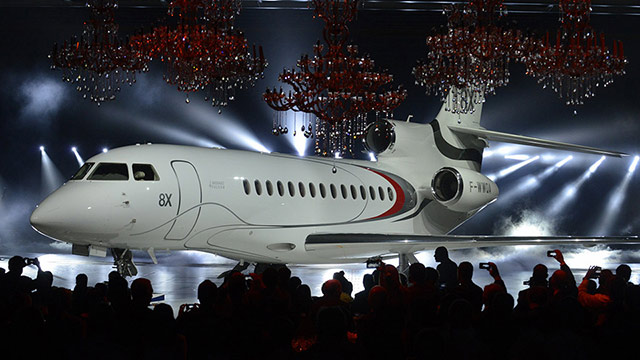 Dassault Aviation on Dec. 17 rolled out the first of its new line of ultra-long-range business jets—the Falcon 8X. The event took place at Dassault’s final assembly plant in Merignac, France, near Bordeaux. For the event, an assembly hangar was transformed into an elegant dining and staging area, complete with chandeliers, carpet, and a string quartet. As the attendees watched amid Falcons in mid-assembly, the curtain was raised and the 8X made its debut.

The 8X represents the newest top-of-the-line airplane in the Falcon lineup, and while it may closely resemble the previous holder of that title—the Falcon 7X—there are a number of design changes. For one, the 8X has a 3.3-foot fuselage stretch. This stretch permits the installation of a conformal fuselage fuel tank, which in turn enables the airplane to fly as far as 6,450 nautical miles at Mach 0.80 and FL470. Maximum fuel capacity is 34,900 pounds, up 2,960 pounds from the 7X. The extra fuselage length also allows two additional cabin windows, and more than 30 different interior seating configurations.

The 8X has newly designed wings, which Dassault says are optimized for less drag and lighter weight. The slat leading edge is reshaped, there are new winglets, and the thickness of certain wing panels has been reduced. In all, the 8X wings provide a 600-pound weight savings over those of the 7X, and a 1- to 2-percent drag reduction. 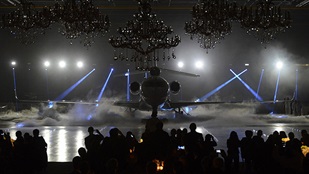 Ultimately, the 8X’s empty weight is essentially the same as the 7X’s. However, the 8X’s maximum takeoff weight—at 73,000 pounds—is 3,000 pounds more. This mandated new, beefed-up landing gear. So with the hikes in weight, Dassault opted to rate the new Pratt & Whitney PW307D engines at 6,722 pounds of thrust for takeoff and climb; that’s a 5-percent boost over the 7X’s thrust rating. Once in cruise the engine power is reduced for fuel burns that roughly match those of the 7X.

Dassault likes to point out that the 8X’s closest competitor, Bombardier’s Global 6000, has a 40-percent higher dry weight and 30-percent greater fuel weight. The Global 6000’s fuel burn at Mach 0.80—seven pounds per nautical mile—is higher than the 8X’s 5.5 pound per nautical mile, according to Dassault. Based on flying 600 hours per year for six years, this adds up to a direct operating cost savings of $5 million over the competition, Dassault asserts. 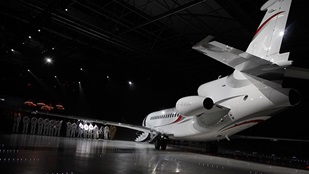 The rollout airplane may have had its public debut Dec. 17, but this airplane has already had its first electrical power-up and engine runs. Target date for first flight is sometime in the first quarter of 2015, with certification following in mid-2016, and first deliveries of the 8X in the second half of that year. Orders are on target as well. Dassault won’t say how many 8Xs are in the order book, just that they are sold out until 2018. At which time the price will reach $60 million for a completed airplane. That’s steep, but Dassault is especially banking on continued success in Asian markets, where more and more companies need to fly nonstop to a wide range of destinations in the United States and Europe.

AOPA Pilot Editor at Large
AOPA Pilot Editor at Large Tom Horne has worked at AOPA since the early 1980s. He began flying in 1975 and has an airline transport pilot and flight instructor certificates. He’s flown everything from ultralights to Gulfstreams and ferried numerous piston airplanes across the Atlantic.
Go to Thomas A. Horne's Profile
Topics: Aviation Industry