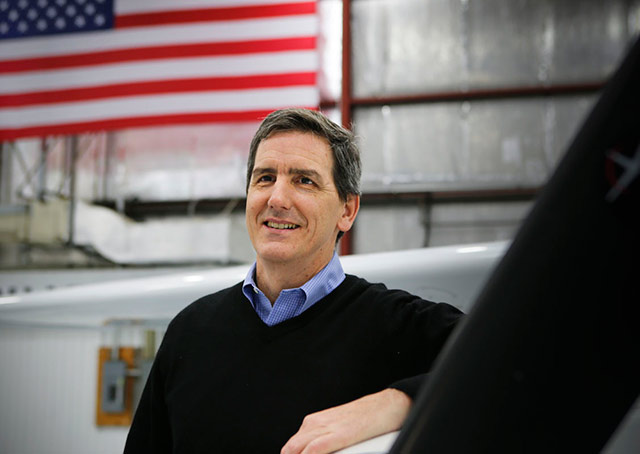 Many student pilots are nervous come checkride day. When you’re a top official at the agency responsible for the safe operation of the largest airspace system in the world, it can add to the pressure.

As deputy administrator of the FAA, Michael Whitaker is responsible for helping to ensure the safe and efficient operation of the National Airspace System. In April, he began flight training outside of Washington, D.C., in some of the nation’s most complicated airspace. He took his private pilot checkride in October, and said he felt the pressure.

“It occurred to me sometime in the middle of the summer that it wouldn’t really be acceptable for me not to pass,” he said during a visit to AOPA headquarters in Frederick, Maryland, Dec. 15 to talk about his flight training journey.

Whitaker had taken ground school as an elective and a few hours of flight training during college, but didn’t start training in earnest until decades later, he said. He had intended to keep his new enterprise private, he added, but realized that wouldn’t be easy when someone asked him directly if he flew. He answered honestly; then the word got out. In early October, he explained to an audience of fellow AOPA members at AOPA’s Homecoming Fly-In that he had begun flight training “to better understand my job and better understand general aviation issues” and went on record that he hoped to take the practical test by the end of the month.

That made October a very busy month. Whitaker took his checkride on schedule at Easton, Maryland, east of where he had trained at Freeway Airport within the Washington, D.C., Special Flight Rules Area (DC SFRA). It was an eight-hour affair from the time he arrived at Easton to when he left a newly minted private pilot, he said.

‘The formula is completely different’

Having been involved in aviation his whole career—from working on aviation-related cases while practicing law to working in the international airline industry before coming to the FAA—Whitaker said he has a broader view of the environment of flying than most people do. But that doesn’t mean training was easy. Whitaker said the sheer volume of information to learn was a challenge, as was learning old technologies he knew he wouldn’t have to use very much after earning his certificate given the flight planning assistance that technologies like apps can provide.

He also ran into the two classic student pilot challenges: time and money. When he was putting himself through law school, money was the issue, he said, although at that point he was only dabbling in flight training.

“Of course, now the formula is completely different,” he said of returning to flight training while maintaining his duties at the FAA. “You have the money but not the time. … Getting the hours in the airplane and the training sessions was the challenge.” He set aside the time to fly frequently and advised other student pilots to do the same; when he had to take much of September off from flying, he said he felt like he lost ground.

Crosswind landings were a challenge, too, Whitaker said, although mainly because he didn’t get to practice them much during a summer that was short on windy days. He got a chance to brush up on his skills, though, in AOPA’s Redbird FMX full-motion aviation training device Dec. 15. As Whitaker got an introduction to the simulator (as well as glass cockpit avionics, the constant-speed propeller, and retractable-gear operations), AOPA instructor Brenda Tibbs dialed up the wind, rocking the simulator momentarily with wind shear as he set up for a landing.

Now a private pilot, Whitaker is again faced with the challenge of finding the time to fly. He had to cancel a planned flight to his home in New Hampshire over Thanksgiving, he said, but he continues to look for opportunities to fly and has started a bit of instrument ground study. He’s looking at stepping up from the Cessna 172 in which he trained to a faster airplane suited to trips to New Hampshire, perhaps a Mooney. And he’d like to explore destinations on the East Coast.

“A lot of little airports out there,” he said.

Whitaker said he was motivated to learn to fly for his own edification and because of his job: so he could understand technologies beyond the intellectual level and so he could better understand general aviation issues. While at AOPA headquarters, he spoke with AOPA President Mark Baker about some of those issues affecting GA.

Whitaker oversees the development and implementation of the FAA's Next Generation Air Transportation System (NextGen), a key technology of which is Automatic Dependent Surveillance-Broadcast (ADS-B), and flew with ADS-B during his training. He told AOPA that he saw the value of ADS-B In, the receiver component that can deliver weather and traffic to the cockpit, during a training night flight to Lancaster, Pennsylvania, with his instructor. Air traffic control had told them they could fly straight over Baltimore and stay ahead of a storm, he said, but he and his instructor called up the weather in the cockpit and saw that they wouldn’t be able to make the return flight that night. They scratched the flight.

In an interview on AOPA Live, Baker and Whitaker discussed the upcoming 2020 mandate for ADS-B Out in airspace where a Mode C transponder is required today. AOPA has voiced concern over the cost of the technology, particularly for owners of older aircraft; ADS-B Out provides aircraft position information to controllers and other aircraft but does not include ADS-B In traffic and weather. Whitaker acknowledged that cost is among the issues identified by a government-industry group that the FAA is working to resolve. He said that more than a dozen equipment manufacturers are making ADS-B equipment for GA, which provides competition, and touted the benefits of weather and traffic in the cockpit from ADS-B In. 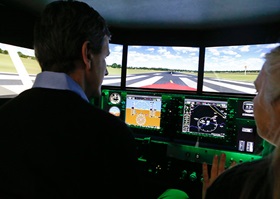