‘The single most important license I got’ 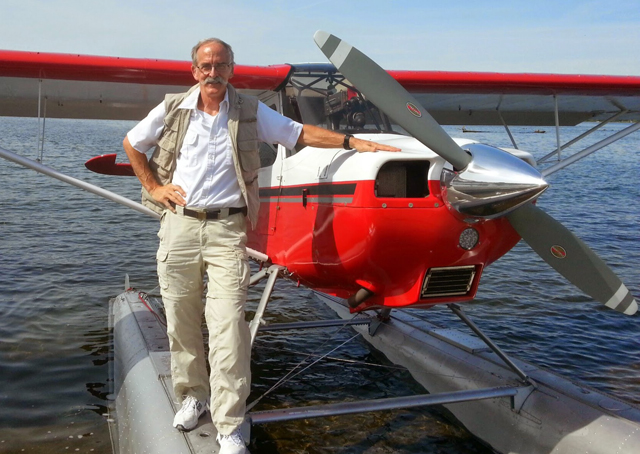 When what had seemed like a guaranteed job doing what he loved fell apart in front of him, it gave him a path forward. When he was furloughed from an airline job, it gave him a way back in. When he hangs up his captain’s hat and epaulettes, it will give him a retirement plan.

Decades after he earned his flight instructor certificate, Delta Air Lines Captain Jeffrey Whitesell continues to teach stick-and-rudder (and float) skills when he’s not flying Boeing 757s and 767s internationally. He said flight instruction has been his backstop his whole career, many times opening a door where one otherwise might not have been opened.

“The central theme that I’d like to pass on to youth is the flight instructor license is the single most important license I got,” he told AOPA in a recent phone interview. That’s a strong recommendation from a senior captain whose airline schedule takes him to Honolulu, Hawaii, and Japan, with flights from there to other Pacific destinations. (He even gets layovers long enough to go scuba diving in Palau, he said.)

Whitesell estimates that he has about 25,000 hours of flying, probably more, in aircraft ranging from gliders to twinjets. He’s flown for charters and airlines, owned his own business, and instructed in an airline training department and from lakes in the Pacific Northwest. It’s a varied aviation career that started with mowing grass at his father’s airport in New Jersey.

Whitesell’s father built the fly-in resort Flying W Ranch and started a business on the field with training, charter, and cargo operations. The younger Whitesell earned his commercial pilot certificate and instrument and multiengine ratings and was ready to work for his father, he said, when “it all fell apart.” His father was squeezed out of business, he said. The son was trying to fly charters and go to college when Jack Eggspuehler from The Ohio State University suggested he get his flight instructor certificate and instruct at Ohio State.

Inspired, Whitesell earned the certificate and flew to Ohio State the same afternoon, he said. He instructed while attending the school and later taught at Embry-Riddle, he said, before flying heavy airplanes in Florida. He started working at Western Airlines, which later merged with Delta, in 1978. Whitesell’s flight instructor certificate came to his aid again after he was furloughed from the airline; he was able to return to Western after a period to teach on the airline’s simulators.

Instructing has been more than a fallback plan, however. Whitesell said that his airline schedule affords him time to instruct once he’s done with travel for the month, and he teaches in floatplanes in the Seattle area at Rainier Flight Service. He enjoys it, and as he nears airline retirement age is thinking about ramping up flight instructing again. The monetary rewards are a little slim, he admits, but there’s plenty of payoff.

“With every student you work with, they have what I call the ‘aha moments,’” he explained. A student will work on something in ground school, in the simulator, and in the airplane, “and suddenly they get it. … That’s the sweet spot.”

When he’s not flying routes to Japan and the Pacific islands, Delta Air Lines Captain Jeffrey Whitesell teaches floatplane flying in the Seattle area. So when he needed to renew his flight instructor certificate in 2014, he looked for something that would keep his knowledge fresh and that he could take with him on his travels.

Whitesell took the Air Safety Institute’s eFIRC online flight instructor refresher course with him on a 12-day trip with stops in Japan, Guam, and Saipan, and renewed his certificate from Hawaii. He said the course was perfect for his background and career.

“The beauty of it for me was I could do it 24/7 from anywhere in the world, and I could go as deep or as shallow as I chose to in each topic,” he said. He said he decided to switch to the Air Safety Institute’s eFIRC because he had used the same course for years and didn’t want to get stale.

“I think it was more in depth, and I liked that,” said Whitesell. “I needed the challenge.”

The Air Safety Institute’s eFIRC allows course-takers to work at their own pace on a mobile device or personal computer; Whitesell said he took most of it on his Mac laptop and the rest on his iPad. Course-takers can choose from electives including Customer and Student Retention, Human Factors, Mountain Flying, and more so CFIs can learn about topics best suited to them.